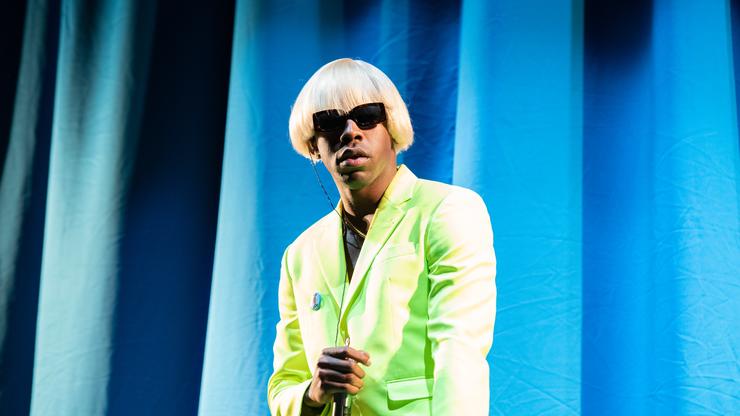 Tyler, The Creator reveals that he’ll be voting for the first time this November and wants you to do the same.

Tyler, The Creator has never really been the political type but with the November elections looming closer, he’s encouraging all of his 9.9M Instagram followers to “pull up” to the voting booth.

The Odd Future leader shared a video on his Instagram page urging all young people to vote in the upcoming election, no matter what. Acknowledging that he’s never been vocal about his political stances in the past, he explained that he’s found a newfound understanding of the importance of voting. “Yo, it’s T. Look, I know I’m the last person you should ever take advice from but I’m reiterating what everyone else is saying and please, please if you’re young and your back don’t hurt, go to them polls and cast a fuckin’ vote,” he said.

He, like many, have never been to a polling station before, admitting that he’s never understood the significance of his ballot. But in what’s turning out to be one of the shakiest election to date, Tyler made it clear that he wants everyone to join him in practicing their right to vote.

“I didn’t give a fuck about none of this shit just like a lot of y’all. This is actually my first time voting but I’m on the other — I see the light,” he continued. Between COVID-19 and the eruption of protests across the country, many have echoed the demand for change. Tyler explained that if people seriously want change, beyond posting a black square to their IG page, they gotta “pull up.” Beyond the imminent change needed in the justice system, Tyler explained he wants to see more education reform, specifically when it comes to making the arts accessible, as well as rights for women and the LGBTQIA+ community.

“Y’all gotta pull up. Actually go to the polls. ‘Cause of that mail-in shit, n***as gon’ try and call fraud so if you could, go to the polls. And I know them lines gonna be long and it’s gon’ be hot, but please, do that,” he closed out.

Peep his PSA below.

pULL uP ð¤¤….for real tho, mail in or in person would be nice, stay safe: vote.converse.com check where you at if youre unsure