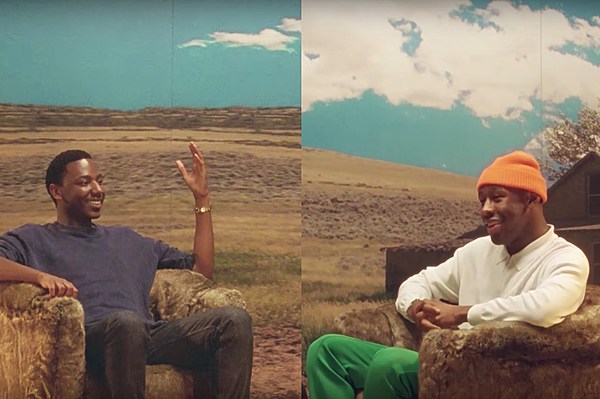 Tyler, The Creator might have a lot to say when it comes to social media, but he's not a fan doing typical interviews about his creative process. For his latest Flower Boy album, the California-bred rapper films a conversation between himself and comedian Jerrod Carmichael, where they discuss the project in-depth.

Not only do they talk about Tyler's inspiration to make the album, the project's themes, as well as his emotional journey, he also reveals some interesting tidbits about the features on the project, such as Lil Wayne.

As Tyler was making "Dropping Seeds," he instantly knew he wanted Tha Carter IV rapper to deliver some his signature bars despite it being far from his ordinary sound.

"I made 'Dropping Seeds' instantly," Tyler shares. "It was just a quick instrumental I made and I go, ‘I’m getting Wayne on this.' I only wanted 16 bars, maybe 8, but Wayne has to go over this. I want to hear Wayne over these notes, in this pocket, and I want to see what he would do in his high-pitched voice over this lowered tone, in this weird Brian Bennett lounge library music. I told him to just rap about flowers, garden, trees or whatever."

Tyler says that he got Weezy's verse delivered to his email while he was on the road for his Cherry Bomb Tour in 2015. The bars were like hearing Wayne spit over the music from game show The Price Is Right, according to Tyler.

"I was on tour for Cherry Bomb in Omaha, Nebraska, and I got a text from him like, ‘Check your email,’ he states. "I check it and me and Travis are sitting there like what the f—. not only did he bar out, but I’ve never heard Wayne over Price Is Right music. It was] so on topic and so good."

Also during the conversation, Tyler talks more about getting curved by ScHoolboy Q and Justin Bieber for songs he wanted them on. While the Odd Future co-founder previously revealed that the TDE rapper flat-out rejected dropping a verse on "Who Dat,"  he reveals that Bieber never returned his call about being on "Glitter."

"I wrote 'Glitter' for Bieber," he confesses. "I wanted Justin to have that. I thought he would be so cool doing that, but he never returned the call. I was just like, 'F— it, I’ll write it and just make it cool.'"

Tyler also reveals other compelling facts about his creative process, including the fact that the album cut "911" is actually the 25th version that he made the song. He even admits that he hates his own voice, which led him to use a different accent on "I Ain’t Got Time."

Watch the full conversation between Tyler and Jerrod Carmichael discussing Flower Boy below.