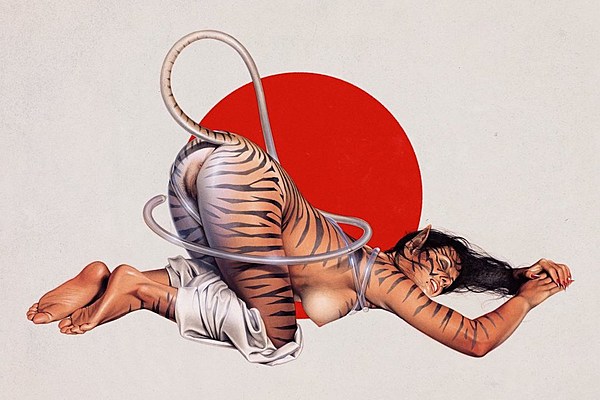 After dropping his Bitch I'm the Shit 2 album last year, Tyga is ready to unveil another one with his upcoming Kyoto LP. The California rapper announces the new studio album on Twitter, unleashing some racy cover art and the project's release date.

While the artwork for the album is what has his fans talking, the more important news is the fact this will be a project dedicated to singing. The LP is slated to drop on Feb. 16 and will include 14 tracks. As right now, fans who pre-order the album will automatically received his previously released songs, "Temperature" and "Boss Up."

The racy cover art, which was illustrated by Japanese artist Hajime Sorayama, features a woman, who also appears to be a tiger, posing in a provocative manner with her pants down.

Being that she is fully nude, and her private parts are exposed, some users on Twitter seem to be fended by the artwork. Tyga, however, expresses how meaningful this new project is to him and how he finally mustered up the confidence to create it.

"I been wanting to make this album for a while now but didn’t have the confidence an the story to express my true emotions," the rhymer tweets. "I thank all the love an support you have given me over the years. Thru my ups an downs,At My highest and my lowest points."

"Thru my brightest and darkest hours," he continues. "This album is me opening my heart to you and I hope you enjoy it and love it as much as I do. THANK YOU GOD ALWAYS . Thank You Hajime Sorayama for allowing me to share this experience with the world thru your creative art & my vision."

Check out the ficial cover art for Tyga's Kyoto album below, and be sure to pre-order it on iTunes.