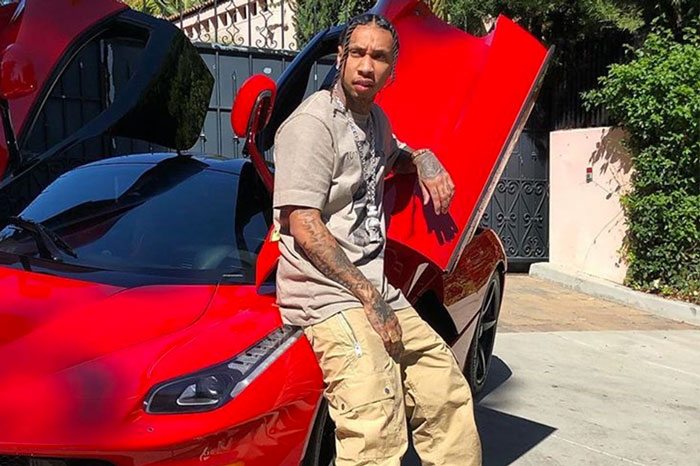 Some fans appear to think that the “Taste” rapper is trolling Kylie Jenner’s ex with his latest Instagram photo. On Monday, T-Raww posted a photo himself stunting in front his red Ferrari while sporting a pair Nike Air Jordan 1 High sneakers, designed by the Astroworld rapper. It didn’t take long for Tyga’s 17.2 million IG followers to notice his surprising footwear choice.

“The shade!” wrote one fan, while another asked, “You going to Jamba Juice?” a reference to Travis’ “Sicko Mode” lyrics.

The photo came less than an hour before Kylie posted and deleted a video showing f her own fancy whip, a $3 million Bugatti Chiron.

In the wake her breakup with Travis, Kylie and Tyga were spotted at the same hotel and nightclub in the same week. On Tuesday night, Kylie was seen dropping f her friends at the Sunset Marquis, where Tyga was recording in the hotel’s studio. However, Kylie took to Twitter to deny the hookup rumors.

“The internet makes everything 100 times more dramatic than what it really is,” she tweeted. “There was no ‘2am date with Tyga’. You see me drop two my friends f at a studio that he happened to be at.”

On Saturday night, Kylie and her sister Khloé Kardashian showed up to Hyde Lounge in West Hollywood where Tyga was partying. The rapper arrived earlier in the night and left at 2 a.m. in his red Ferrari.

The exes dated on and f for over two years before breaking up in 2017. In the midst the speculation, Tyga stepped out to Universal Studios Halloween Horror Nights with model Emily Caro.