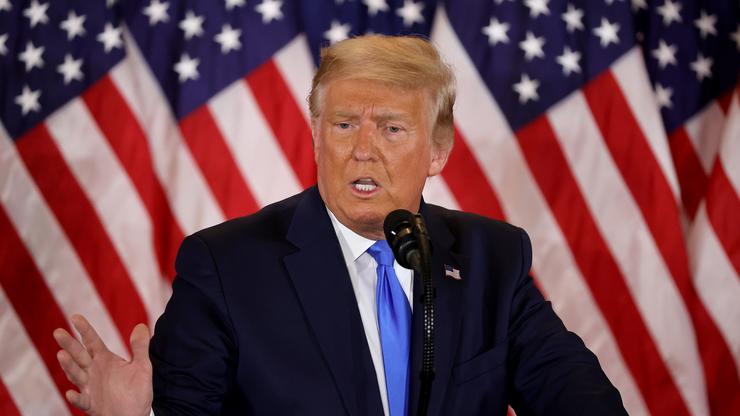 During his White House speech, he said he is ready to take his case to the Supreme Court and added “we did win this election.”

In the thick of a tense election season, Donald Trump has given his post-election voting day speech from the White House. It’s reported that it may be days before America has counted every last vote in the presidential election, but that didn’t stop President Donald Trump from declaring victory. Hours before Trump took to the podium, former Vice President Joe Biden addressed his supporters in Delaware and stated that he is enthusiastic about the outcome of the votes and will wait until all have been tallied before any celebrations. President Trump’s speech was a tad different as he spoke to a cheering crowd and told them that he’s taken swing states that haven’t officially shared if they’ve gone blue or red.

“I want to thank the American people for their tremendous support. Millions and millions of people voted for us tonight,” said Trump. “A very sad group of people is trying to disenfranchise that group of people and we won’t stand for it.” Trump added that he and his team were ready to celebrate a victory but was told that more votes needed to be counted.

“All of sudden, everything just stopped. This is a fraud on the American public. This is an embarrassment to our country,” Trump stated. “We were getting ready to win this election and frankly, we did win this election… So, our goal now is to ensure our integrity for the good of this nation. This is a very big moment. This is a major fraud on our nation.”

“We’ll be going to the U.S. Supreme Court. We want all voting to stop. We don’t want them to find any ballots at 4 o’clock in the morning and add them to the list, okay?” the President stated. “It’s a very sad moment. We will win this and as far as I’m concerned, we already have.” Watch his speech below (Trump enters around the 20-minute mark).