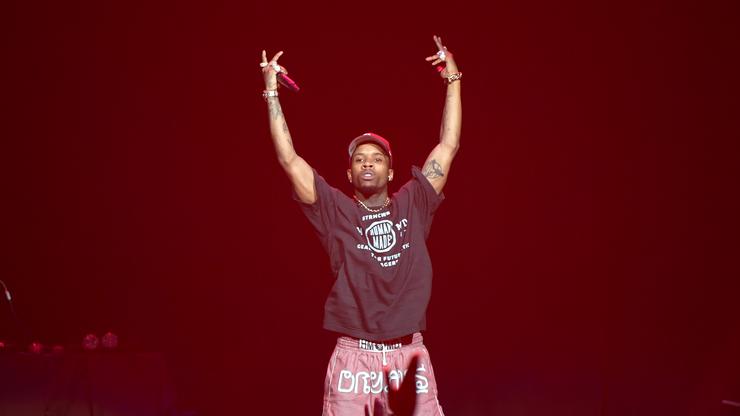 Tory Lanez appears to be back to business as usual on his Instagram, following his hiatus after the Megan Thee Stallion shooting came to light.

Tory Lanez released his album, Daystar, on September 24th, in which he denied Meg Thee Stallion’s accusation that he shot her twice in the feet this past summer, marking his return from hiatus. Since the album, Tory Lanez has also made his way back to social media after a prolonged absence. In accordance with his declarations on Daystar that the crime he stands accused of (and was recently charged for) won’t hold him down, Lanez’s recent Instagram presence is notably upbeat.

Lanez took to Instagram on October 12, to post a photo set of him grinning from ear-to-ear with his hands raised over his head in peace signs. The caption reads, “Abundant Blessings to You ….. Stay fearless . #EndSars.”

It’s worth highlighting the hashtag that ends his caption, although it appears random and disconnected to the post itself. International attention has recently been turned towards Nigeria, where citizens are currently protesting the routine harassment, extortion, and violence they face at the hands of a police unit gone rogue known as SARS (Special Anti Robbery Squad). The hashtag #EndSars has been trending for days, with many people around the world posting in solidarity with the Nigerian people, and it seems Lanez is joining them.

Whether by design or not, his caption (and his all-white getup) certainly align with the innocent narrative he’s been rolling with since Daystar dropped.

It’s possible this is Lanez’s way of demonstrating his unwavering faith that his self-proclaimed innocence will soon come to light, ahead of his arraignment set to take place later today, on October 13th. The post was made hours before the New York Times released an Op-Ed written by Meg Thee Stallion, in which she elaborates on the importance of her “Protect Black Women” message from the season premiere of Saturday Night Live last week.