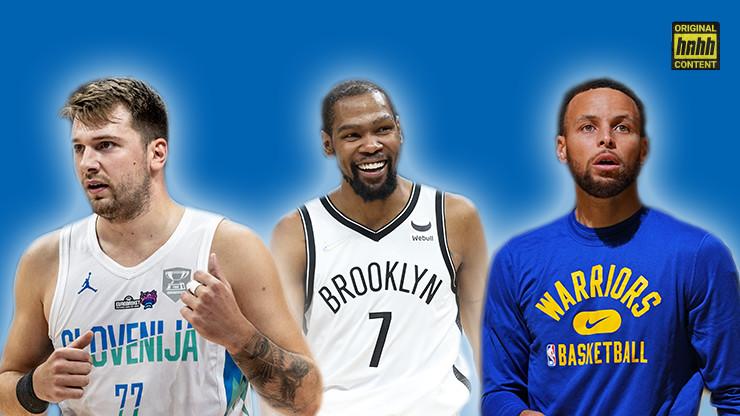 With the NBA season about a month away, we counted down the five best players in the league.

There has never been a better time to be an NBA fan. Over the last couple of seasons, the league has experienced tremendous parity. Teams that never competed for championships before are now seen as viable contenders. In 2021, we saw the Milwaukee Bucks and Phoenix Suns climb their way out of irrelevancy and make it to the NBA Finals. Not to mention, in 2019, we had the Toronto Raptors win their first NBA title. As for last season, teams like the Memphis Grizzlies, Dallas Mavericks, and even the Minnesota Timberwolves made huge leaps that have ultimately made the NBA more intriguing.

A big part of this parity is the fact that there are a ton of amazing superstar talents around the NBA. In any given season, there are about five to seven players who could potentially win league MVP. It has made the NBA that much more fun to watch, as you can tune into almost any game and be privy to some sort of otherworldly performance by one of the league’s best talents.

Heading into the 2022-23 season, there are plenty of players who could claim the throne of the NBA’s best superstar. This makes crowning the league’s top 5 almost impossible. With that being said, we’re going to attempt to do just that, even if our takes might lead to some tomatoes thrown our way.

Luka Doncic could very well be an MVP-winner this season, although he will need to make some leaps if he wants to be a bonafide top-five player in the entire NBA. As we all know, he is a tremendous offensive talent who is poised to become the face of the NBA once LeBron James retires. On any given night, he can give the opposing team buckets and he has mostly carried the Dallas Mavericks over the years, despite them not having a bonafide number two option.

The main issue with Doncic is that his performances are sometimes top-heavy. He tends to go off in the first half of games but once crunch time comes around, he diminishes. Sure, he has hit some incredible clutch shots, but he needs to play more complete games if he truly wants to take over as the best the league has to offer. He has the time to do so, and we can’t wait to see how he continues to improve.

In the eyes of most NBA fans and even players, Joel Embiid should have been the league MVP last season. With Ben Simmons gone, Embiid was forced to carry the Philadelphia 76ers to the postseason. He ultimately did just that while winning the scoring title as a center. Embiid is a top 2 big man in the entire NBA and he is someone that can completely take over a game and leave the opposing team disheartened.

Simply put, Embiid can do it all. From rebounding to scoring to sometimes even shooting from deep, Embiid knows how to use his skills and size to his advantage. He is a bully in the paint and he is one of those players who is impossible to move. Following last season’s performance, Embiid absolutely deserves to be seen as a top-five talent in the NBA, and with James Harden by his side this season, the Sixers are looking to make a huge leap. If given the proper resources, Embiid is someone who could some day find himself with a Finals MVP trophy.

Ah yes, Steph Curry. He is the greatest shooter in the history of the NBA, and there is no disputing that. This past season, he won his fourth NBA title in tremendous fashion, and he was able to get over the Finals MVP hump. It was a fairytale season for Curry, who is now expected to repeat last season’s success and perhaps even bring the Warriors to a fifth title in nine years. Explaining why Curry is a top-five player in the league isn’t very interesting as we all know why he’s up here. His offensive game speaks for itself and if you were to ask Warriors fans, they would tell you he may very well be better than Michael Jordan (which is ridiculous).

Instead, we’ll simply explain why Curry isn’t top-three on our list. Simply put, it all comes down to his lack of a defensive game. Curry can sometimes be a liability on defense, and when it comes to doing anything other than jump shots, Curry has been known to fall short. There are just so many amazing players in the league who have more complete games, and that’s why we have Steph slotted in at four.

Next up on the list is the man that won MVP over Joel Embiid this past season. Nikola Jokic has won two MVPs in a row and is considered to be a darling of NBA media. There is a very good reason for this as Nikola Jokic has one of the most impressive games we have ever seen from a European big man. He can shoot the lights out of the building, he can rebound like no one else, and his offensive game has singlehandedly carried the Denver Nuggets over the past couple of seasons with Jamal Murray injured.

Jokic is a player who can take over a game at a moment’s notice, and opposing teams still do not know how to stop him, without putting three guys on him all at once. Jokic is one of those guys who is all about his business, and it almost feels like he is the basketball equivalent of the Terminator. He still has many years of superstardom ahead of him and with Murray returning this season, Jokic’s game could be raised to another level, which should scare the pants off of every other team around the league.

Kevin Durant has been subjected to some slander this offseason thanks to his failed standoff with Joe Tsai. Durant wanted out of Brooklyn but in the end, he decided to stay. Now, Durant will get to play an entire season with Kyrie Irving and Ben Simmons. This trio has a lot of bust potential especially since Kyrie and Simmons are known for their absences more than their presence. With that being said, they could also win an NBA title together, which just goes to show how volatile some teams truly are.

KD is one of the best offensive talents in the history of the NBA. If you had asked people last year, they would have said that KD is the best player in the entire league. Now, that has changed but not by much as KD is still a solid pick for the second-best player in the league. He can drop 30 points with his eyes closed, and his shooting ability is something that players could only dream of possessing for themselves. Going one-on-one against KD is a guaranteed loss, and whenever he is on the court, there is potential for him to do something special. He might be getting up there in age, but if he ages like LeBron James, there is no doubt that KD could be the best player in the league by the time the season is over.

Last but certainly not least, we have Giannis Antetokounmpo. Our number one and two spots could have been swapped, had KD not been swept in the postseason last year. KD showed a bit of weakness while Giannis showed complete and utter resolve. Giannis took his Bucks to the NBA Finals just one year ago and won the whole thing. He scored 50 points in the closeout game of the NBA Finals, which ultimately helped him win Finals MVP. He did this for a team that had not won anything in 50 years, and he made the city of Milwaukee a relevant basketball town which many thought was impossible to do.

His performances this summer at the Eurobasket tournament were nothing short of amazing, and they were yet another indication of what Giannis is going to do this season. He is a player who dominates on offense and defense which makes him a unicorn in this league. His nickname “The Greek Freak” is incredibly well-deserved and while he might not be able to shoot like Kevin Durant, he doesn’t need to. He can run through anyone, dunk over anyone, and most importantly, stop anyone. Twitter accounts like Ball Don’t Stop love to hate him because he doesn’t have a “bag.” This kind of assessment is silly. Basketball is about getting balls in the basket and winning games which is something Giannis does better than anyone.

Putting him anywhere other than first on our list would simply be a fool’s errand.

Let us know your pick for best players in the NBA, in the comments section down below.