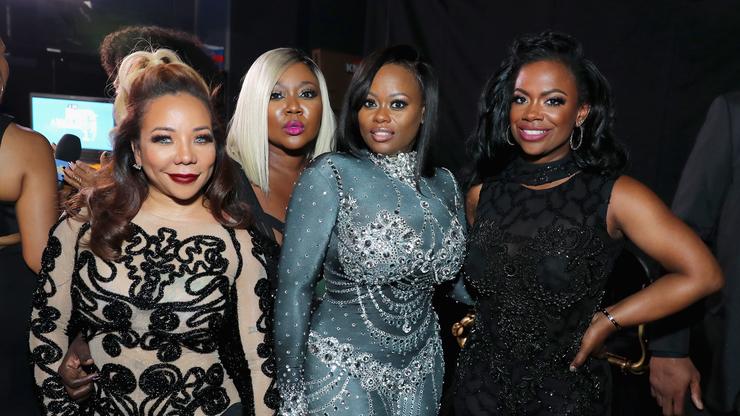 She also added that she and Kandi had a “little slap” altercation, as well.

Some people felt that Xscape disbanded before it was their time. The girl group rose to fame during the 1990s, and while their hits are now considered classics, some critics believe that the quartet—comprised of Kandi Burruss, Tameka “Tiny” Harris, LaTocha Scott, and Tamika Scott—let personal issues hinder their career. There were murmurs of in-fighting and by the early 2000s, Xscape was no more.

In 2017, the ladies were able to put their past beef behind them as they embarked on a nationwide tour, however, Kandi wasn’t interested in reforming the group. She stated that she wouldn’t be recording with the other women, so they moved on as a trio named XSCAP3. There is much to unpack in Xscape’s history, and Tiny has hinted that there is a movie in the works that will detail their highs and lows, including physical altercations that occurred between the women.

“I think it was a lot of ego involved,” said Tiny of why Xscape broke up. “It was a lot of people from, not just the four, outside of us that had their input and their say. It just kinda, just turned into a big—and then also, we had like, little small issues from early on in the days that kinda escalated. Never got resolved and just blew up into this big like, I don’t like you, I can’t stand you, type of thing. It just got hard to keep it together, to come to work. It started feeling like a drag just to be there.”

Tiny said that it came to a point where each member had beef with one or two other members, making it difficult for the women to get together. “It was just too much and started getting forced.” However, things took a turn after fights erupted between members.

“There was definitely some fights,” Tiny admitted. “We only had really two fights. Me and Kandi had a little slap. Little quickie. I was pregnant so it wasn’t that bad but we did have a little slap here and there, got into it a little. And then Tocha and Kandi finally got into a fight, as well. It just seemed like it was a long-overdue time because they were always kind of back and forth and it finally escalated into a real fight.”

She detailed what she could remember, saying that it all went down at a rehearsal hall and by the end of the fight, the room was “turned upside down.” With an Xscape movie on the way, she wouldn’t reveal who won the fight and just said viewers will have to find that out when the film is released. Watch Tiny talk about Xscape’s drama and subsequent solo careers below.