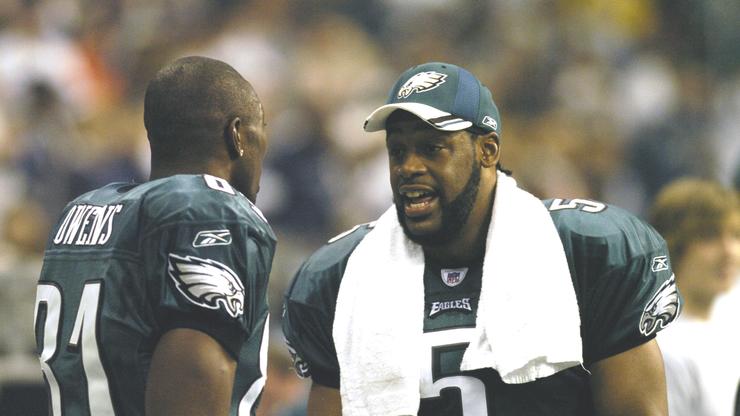 The feud between Terrell Owens and Donovan McNabb is well known. The two former Philadelphia Eagles players have spent years throwing public barbs at each other. Their disagreements are what led to a split for the teammates, who made it to Super Bowl XXXIX in 2005, but were defeated 24-21 by the Patriots.

Owens recently sat down with Shannon Sharpe on Club Shay Shay, and went in on McNabb. “I had one guy who was like…who would you want to fight? I said Donovan McNabb, and I’m dead serious Shannon I’d knock him out,” gloated Owens. “I would be controlled, it would be controlled anger …I’d knock the Chunky soup from him for 2004.”

Last year McNabb appeared on Bleacher Report’s Untold Stories with Master Tes, and explained how he felt that Owens was responsible for breaking up the Eagles in 2005.

“The offseason goes through and all of the sudden there’s turmoil here there are conversations going back and forth and we had to answer those questions instead of focusing on what we need to do in order to get back to where we were and I thought that was the major distraction for us,” explained McNabb.

“You know, he’s doing sit-ups, you know, he’s doing push-ups, he’s playing basketball, he ordered pizza for the people out there and we sitting there in training camp just like, ‘You gotta be kidding me,’” he continued. “I’m just sitting there, I’m watching on TV and Brian Dawkins and Trotter were my roommates. And Dawk comes in and he’s like ‘What did he do now?’ and I’m like ‘Take a look.’ Like, this is like Days of Our Lives. Like, it’s unbelievable, you know. That was something that kind of broke us up. That was the most frustrating thing for me.”