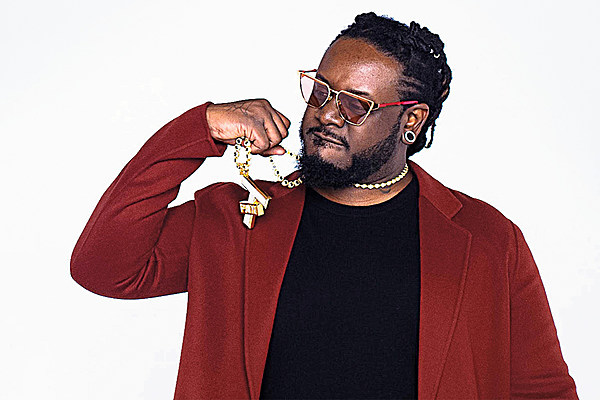 Kodak Black may be beefing with one Florida rapper, but T-Pain has no problems with his fellow Sunshine State artist.

On Sunday (Jan. 21), T-Pain shared a preview his upcoming "Roll in Peace (Remix" on Instagram. "Set my nigga @kodakblack free. That ain't where he supposed to be," the rapper wrote.

T-Pain kicks f the song, saying, "If we gon' be Florida niggas, let's be Florida these days. Let's all roll together, nigga." Later in the track, Pain shows f his bars, rapping, "I can't even roll in peace/All my cars orange and green/I can't even go to sleep/Your bitch keep blowin' me/I rep that shit from that 8-5-0 down to the Florida Keys."

While T-Pain recently released his Oblivion album this past November, it appears the artist is gearing up to drop another project. "T-mixtape comin' soon," he wrote on social media.

In related news, Kodak Black was arrested on Jan. 19 on seven charges, including, grand theft a firearm, two charges possession a weapon or ammo by a Florida delinquent adult felon, possession cannabis over 20 grams, child neglect without great bodily harm and two counts parole violation. The rapper is currently behind bars at the Broward County Main Jail.

Check out a preview T-Pain's "Roll in Peace (Remix)" below.