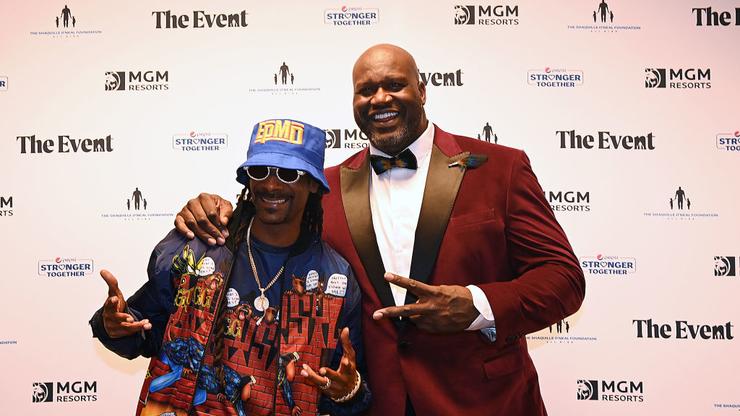 Snoop Dogg and Shaquille O’Neal trade bars during a standout performance of “Nuthin But A G Thang.”

On Saturday, October 2nd, Snoop Dogg took the stage at the MGM Grand Garden Arena in Las Vegas. During his set, Snoop Dogg made sure to highlight a few of his early classics — albeit with a massive twist, one that proved delightful to the fans in attendance.

For his rendition of Dr. Dre‘s The Chronic single “Nuthin But A G Thang,” Snoop Dogg brought out Shaquille O’Neal to hold it down in lieu of the Good Doctor. Of course, Shaq is no stranger to spitting bars, having previously released music alongside The Notorious B.I.G, Twista, Method Man, DJ Quik, and more.

Rapping Dre’s verse without missing a step, a suited-up Shaq once again plays the wingman role alongside the veteran performer. His commanding baritone is a fitting substitute for Dre’s own, and though the days of Shaq Diesel and You Can’t Stop The Reign are long gone, it’s clear that he can still rise to the occasion when called upon.

And from the sound of it, Snoop Dogg was honored to share the stage with his pal. “I wanna do something real special right now,” he declared, ahead of this collaborative performance. “I wanna bring out somebody that means a lot to me. One of my dear friends who I feel like we got in at the same time. We been doing the same things lately and he’s the man of the night. So if you don’t mind, we gon’ do something special for y’all. Never before, never seen, Snoop Dogg and Shaq. Let’s go.”

Check out the performance below, which took place during The Shaquille O’Neal Foundation-hosted concert to benefit the  Boys & Girls Clubs. Do you think Shaq did Dr. Dre‘s “G Thang” part justice?