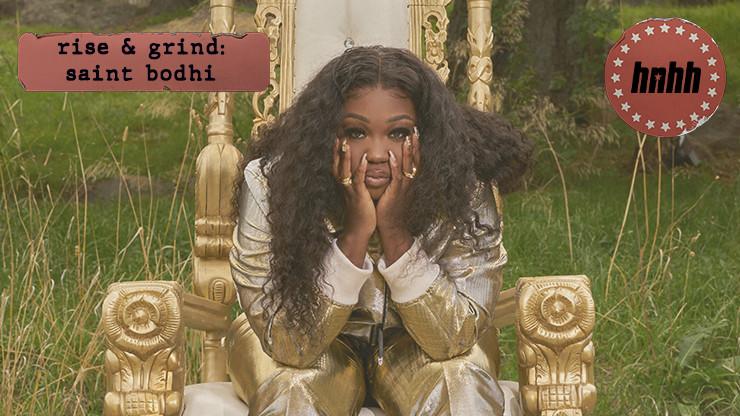 Image provided to HNHH by artist

Saint Bodhi discusses her breakout project “Mad World,” getting a story published in Marvel’s “Black Panther” comic book, her love for video games, and the moment she found out that she was Grammy-nominated for “Rise & Grind.”

There’s versatile, and then there’s rising South Central artist Saint Bodhi. The talented Def Jam signee has quietly built a strong reputation as one of the most hard-working Hip-Hop and R&B songwriters, and as such, she already boasts credits on tracks from A$AP Rocky, Jaden Smith, Kevin Gates, and more. Her debut album, titled Mad World, arrived a little under a year ago, and while that sonically adventurous project was undoubtedly an early glimpse at Bodhi’s capabilities as an artist, her recently released Antisocial EP showed that she is only getting better as she progresses.

Unlike many acts within the music industry, however, Saint Bodhi’s talents extend well beyond songwriting. Earlier this year, she had the chance to pen a short story for Marvel Comics as a part of Def Jam Forward’s collaboration with Marvel, and she made the most out of her opportunity. Her story was centered around the classic X-Men character Storm and her connection with a young and orphaned mutant named Abeni, and it appeared at the end of issue #23 in Ta-Nehisi Coates’ Black Panther series this February.

With so much going on in her career, Saint Bodhi still found the time to check in with HNHH and discuss a myriad of topics for the Rise & Grind editorial series. From an astrology breakdown to her do’s and don’ts in the studio, Bodhi offers plenty of insight into who she is as an artist and as a person. Later on in the interview, she recalls some of the biggest moments in her career so far and goes into detail about her experience working with Marvel Comics and the moment she realized that she was a Grammy-nominated artist.

For a crash course in everything Saint Bodhi-related, read the full transcription of the conversation below, edited for length and clarity.

Stay tuned for a new installment of Rise & Grind every Monday.

[Growing up was] just more inspirational! I know Kendrick was really big for me. I literally thought he was the messiah — like Jesus resurrected — when I first heard his music. Outside of that, my inspirations included Nina Simone and Eartha Kitt. More old school, blues influences honestly.

I’m a Pisces sun, Scorpio moon, Sagittarius ascendant. I feel like I am a big baby. At the same time, I feel like I really am a piranha. I’ll nibble your ankles — in the most loving way!

André 3000, Common, Kendrick Lamar. I know people don’t consider Frank Ocean a rapper, but that dude is really cold. He’s really a dope ass rapper. Eminem actually had a lot of influence when I was younger, but I wasn’t supposed to be listening to him. I bought his CDs, snuck them, and listened to him, so Eminem has a major influence in my life.

Getting signed. I’m a little nigglet from South Central, so I didn’t see that happening. And working with Marvel! That was huge ’cause I am a comic head and a superhero at heart. That’s probably one of my biggest accomplishments.

I may leave the studio and disappear for an hour at a time, just to process like four lines. It gets like that sometimes. Or I’ll get really picky about the energy in the studio and just pull out some sage, and then I’m saging everyone cause I feel like something is fucking off. I don’t know what it is, but I can’t fake.

[As far as essentails], a little bit of tequila and dark lights.

I feel like I really found my voice with “Mad World.” When I wrote that album, I just didn’t give a fuck. With “Gold Revolver,” I’m talking about chopping someone up, then I’m talking about prostitution, and all of this crazy stuff. I just didn’t care; it was really liberating for me. I found a part of myself while creating Mad World. It was like another step into the Bodhi world.

My first lyrics, outside of rap, were: “You’re beautiful to me…you make my dreams come true… you’re everything I need…you’re so beautiful to me.” I had these three little notes that I’d hit on the piano, and I used to sing it everyday. I thought I was a fucking genius, and I would just play it and annoy my parents with it.

My first performance was for TimeWarner Television. I was with this girl group, and we got a little sponsor from Apple Bottom. We did this performance, and it was terrible. It was just us — these three little girls — trying to perform, and I remember crying after the performance because I just had no idea what the fuck I had gotten myself into.

It was at the tv network, so it was also my first time in front of cameras. They had us where they would normally have the newscaster, and we were doing a performance in front of a white background. It was terrible. We were kids who had no idea what we were doing.

I game or I take really long drives. I think that kind of decompresses me. Also, I just go on hiatus sometimes with people, like, “I don’t want to talk to you guys for like four days. Give me some space so I can figure out what I’m doing.”

I’m definitely a PlayStation player. I’m more into RPG’s like Assassin’s Creed, Tomb Raider, Uncharted, Resident Evil. I’m trying to sync everything back from when I broke my first PlayStation.

I have a project coming out with DJ Dahi and some paintings that I’m really excited about putting out soon.

HNHH: You’ve been involved in several blockbuster albums as more of a behind-the-scenes figure, so what would you say are some of the craziest albums that you’ve contributed to so far?

Saint Bodhi: Jaden Smith’s album was really cool for me. Working with Nez, who’s actually one of my favorite artists, has been inspiring. And DJ Dahi! Dahi’s personal project that he’s working on.

How did you manage to transition from behind the scenes to the spotlight?

What was the process like writing a short story for Marvel Comics?

It was more mental health-based. I wrote about Abeni and Storm, and the mother figure that Storm was. I more so took from my life — like growing up in the hood and having this cool ability to create, but not knowing what to do with it.

Is Storm your favorite superhero?

She’s my second favorite, my actual favorite is Professor X.

On your author page in Black Panther #23, you revealed that you didn’t have access to your biological parents until after the age of 13, so how did that affect the way you create?

Well, I had my parents, but I like to call them my caretakers because it was a very negative experience. I was eventually able to move with my grandparents, and they were the ones that shaped, molded, and nurtured that talent that I had. The people from my past were just not cool.

Some people have chips on their shoulders from past situations, so did you take any of that energy into how you created music when you first started?

Yeah, it was all a form of therapy. You don’t realize you have a chip on your shoulder until you go through the trials of writing music and interacting with other people. Then you slowly learn how to knock down those little barriers and defenses that you have up, and learn how to process them in a healthy way, which [for me] is music.

You came close to winning a Grammy earlier this year for Lecrae’s “Sunday Morning,” so how does it feel to be a Grammy-nominated artist?

That was so crazy for me, I wrote that song in 2019. I just started getting random calls, and one morning people were texting me “Congratulations.” I was like “Why the fuck are people texting me ‘congratulations?’ Did something happen?” Then, my publisher from Sony calls me and asks, “How does it feel?” I was like, “How the fuck does what feel?!” He said, “You’re Grammy-nominated for the song you did with Lecrae and Kirk Franklin.” It was crazy for me. God was moving. He moved with that situation.