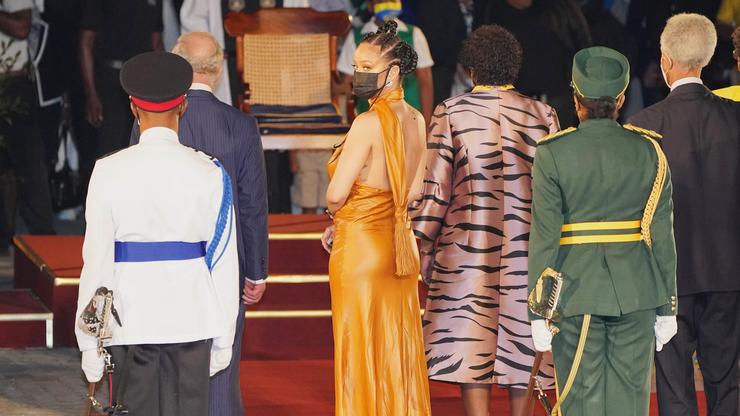 It was November of last year that Prime Minister Mia Mottley of Barbados bestowed the nation’s highest honors onto superstar and businesswoman, Rihanna. Recognized for her contributions and “honor” she brings to her nation, Rihanna was declared the National Hero of her home country. She holds the title of the 11th National Hero of all time, and Barbados’ first since 1998.

Upon being named the National Hero, Rihanna spoke to the people of Barbados, stating her immense pride to call herself a Bajan.

“The people. Y’all are the true heroes of Barbados and I take y’all with me wherever I go. I’m so proud to be a Bajan. I’m gonna be a Bajan ’til the day I die. This is still the only place I’ve ever called home,” she said, on stage alongside Mottley. “I love Barbados. I love you guys. And I pray that the youth continue to push Barbados forward. I’m so proud of you, Prime Minister Mia Mottley. Thank you so much for honoring me in this way. I have travelled the world and received several awards and recognitions, but nothing, nothing compares to being recognized in the soil in that you grew in. I thank you so much for this.”

Rihanna is apparently still reflecting on the monumental event, as she returned to Instagram to speak on her first National Heroes Day.

In her post, she attached a number of photos from last year’s presidential inauguration, which served to mark the nation’s new status as a Republic. She captioned the carousel, “My very first #NationalHeroesDay as a National Hero of my country Barbados!” attaching a number of emojis representing the national flag of Barbados.

She continued, “What an absolute honor to be amongst such great men and women who have come before me and held this title in commitment to our nation! I will forever cherish these memories and continue to represent the Bajan people and my home Barbados to the fullest!! Love and gratitude to both The Prime Minister, The Honorable Mia Amor Mottley and our President, Her Excellency The Most Honorable Dame Sandra Mason for trusting me with this honor!”

In related news, RiRi and A$AP Rocky recently celebrated their impending child with a rave-themed baby shower, although, not without a few bumps in the road along the way.