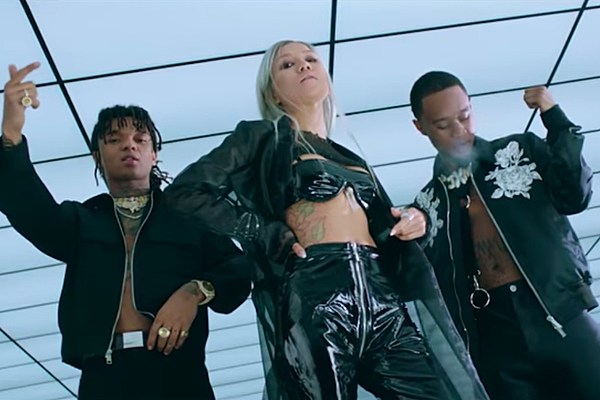 Jhené Aiko unveils the ficial music video for her The Fisticuffs-produced track "Sativa," The visuals feature Rae Sremmurd joining her for the futuristic setup as she gets created in a lab by the "Black Beatles" duo.

As Aiko's modern life form takes over, the trio go through scenes displaying some lit dance parties, steam rooms and even card games. The Mississippi rap stars even count some cash and show f their jewelry in a slew different shots to add some shine as the mellow record plays through.

The ending the video features an epic plot twist as well, which includes Aiko writing down the ideas for the music video in her notebook before it all takes place.

"Sativa" appears on the singer's recently released Trip album, and originally featured Swae Lee as a solo singer on the track. The remix version, which was used for the video, includes both members Rae Sremmurd, incorporating a new verse from Slim Jxmmi.

The two superstars are currently working on their anticipated SremmLife 3 album, which has been in the works over the last year. The new LP follows up their critically acclaimed SremmLife 2. They also recently joined the lineup for the upcoming 2018 Wireless Festival, which will take place in London this summer.

Watch the music video for Jhené Aiko's "Sativa" record with Rae Sremmurd below.