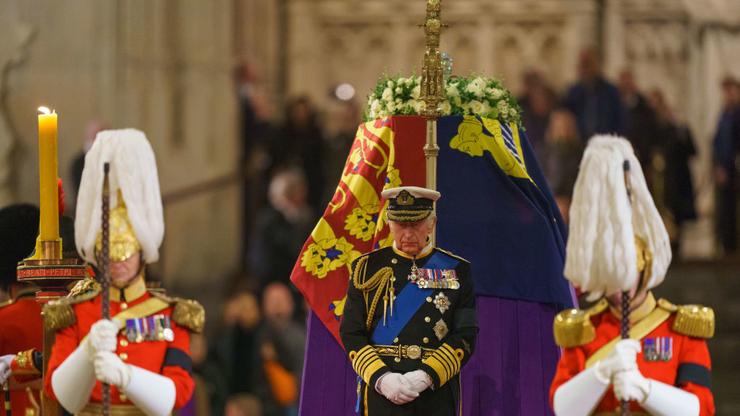 The 19-year-old male flashed two women while waiting in the 12-hour long lineup before jumping into the River Thames to avoid police.

As many continue to mourn the death of Her Majesty Queen Elizabeth II, a 19-year-old man made a spectacle of himself during the late 96-year-old’s Lie-in-State, reportedly exposing himself to women waiting in the lengthy line to pay their respects before running from authorities attempting to capture him.

TMZ broke the story on Friday (September 16), revealing that, while the monarch’s coffin was resting at Westminster Abbey this week, a young man queued up with thousands of others outside flashed his genitalia at two women.

Members of the public file past as King Charles III, Anne, Princess Royal, Prince Andrew, Duke of York and Prince Edward, Earl of Wessex hold a vigil beside the coffin of their mother, Queen Elizabeth II — WPA Pool/Getty Images

According to one of the alleged victims, she was waiting for her turn to walk past Elizabeth’s coffin when she noticed the man in question inching closer to her. She eventually felt something touch her, prompting her to turn around and catch the assailant in the act.

Afterward, the young man is said to have attempted to evade police capture by jumping in the nearby River Thames, though it was ultimately an unsuccessful escape plan for him.

Not long after authorities retrieved their target from the water, he was charged with two counts of sexual assault and two counts of breaching a sexual harm prevention order – all of which he’s already plead not guilty to.

No further updates are available at this time, though we do know that Queen Elizabeth II will remain at Westminster Abbey over the weekend until Monday (September 19), when her official funeral is due to take place – read the details of that upcoming event here, and tap back in with HNHH later for more news updates.