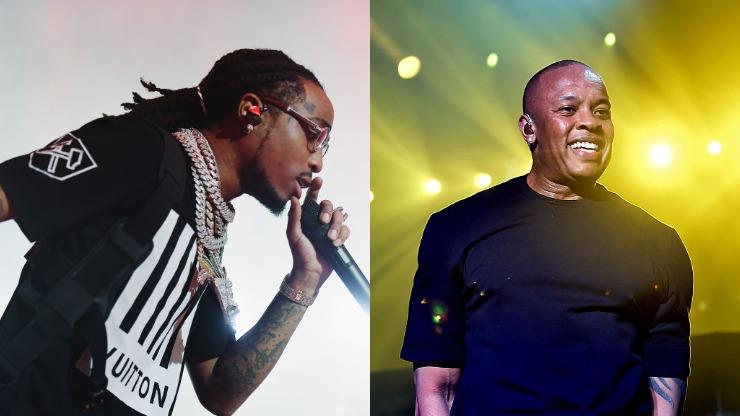 While it’s unclear what they’ve been working on, it appears that Dr. Dre and Quavo were recently cooking up in the studio.

Though Dr. Dre has developed a reputation of being selective in what he releases, the legendary producer has been a frequent visitor to many recent studio sessions. Whether working on music with Kanye West, Xzibit, or Nas, it seems as if Doc has been keeping himself busy behind the boards — though it should be noted that hearing whatever he’s been concocting is far from a guarantee. Now, it would appear that Dre can add another potential collaborator to this list, this time joining forces with Quavo during a mysterious studio session.

Quavo took to Instagram to share a photo from the recent session, opting to keep the caption brief but effective. “Just Left The Dr. Office,” he writes, leaving us wondering as to whether he enlisted Dre to handle something on his next project, whatever that might be. Though it has been a minute since the Doc produced an instrumental — the most recent being his contributions to Eminem‘s Music To Be Murdered By — he has often been sought for his wisdom in the realm of engineering and overall songwriting. Perhaps Quavo was simply exchanging ideas and previewing new music to one of hip-hop’s trusted ears.

For what it’s worth, we recently saw Quavo in the recording studio with Post Malone, though it’s once again uncertain as to what the endgame is there. Perhaps we’ll see a follow-up to 2018’s Quavo Huncho, or possibly the long-awaited Migos album Culture III. Either way, the thought of Quavo and Dre linking up is certainly intriguing. Look for more news on that as it develops.