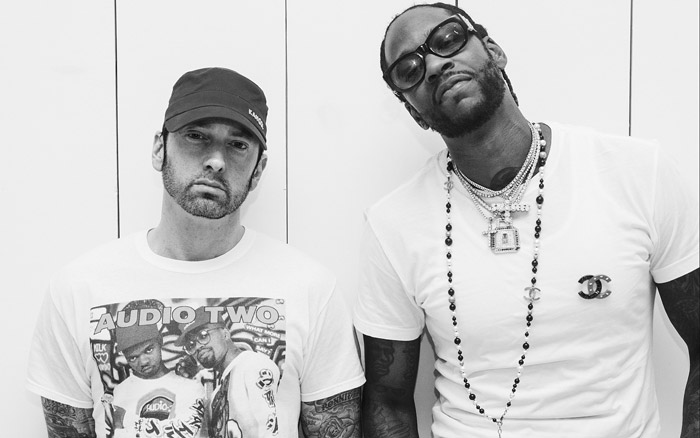 Shady’s back with another one. Still hot f his Revival release, Eminem unleashes the remix to “Chloraspetic” featuring 2 Chainz and PHresher. More than just a revamp, the high-powered banger is also Em’s response to the negative feedback surrounding his album.

“I took a stand, went at Tan Face and practically cut my motherfuckin’ fanbase in half and still outsold you,” he raps. “You just called my shit trash, thank God, I rap better when the odds are stacked / ‘Revival’s wack, I don’t like the ‘Zombie’ track / And when he’s talking that garbage, like how to crap / Where’s your content at, what’s with all the conscious rap? / Pink, Beyoncé, this, and Kehlani that’ / I just added to the fuel in my rocket pack / Until I’m ready to respond, then I’ma launch it at ’em.”

After sharing outrage over his exclusion from the album version, Tity Boi delivers a verse on the remix. “Take ’em to church, I’m talkin’ that tabernacle,” he raps. “It’s the return the body snatcher / Walk in the spot, make my woman smack you / In a fruit fight, I aim at your Adam’s apple.”

This is the same verse Chainz beamed about back in July, when he described the recording: “When it was over, Eminem came in and said, ‘How the hell you rhyme tabernacle with Adam’s apple?’”

PHresher, who handles the hook on the album, provides a verse his own on the remix. “Wanna be in my shoes, you ain’t paid no dues,” he raps. “Lil’ ni**a, you ain’t break no rules / High school, ni**as ate your food.”

Featuring Beyoncé, Ed Sheeran, Kehlani, Pink, X Ambassadors, and Alicia Keys, Revival debuted at No. 1 on the Billboard 200 with 267,000 equivalent album units. The album, which received mixed reviews from critics, is currently No. 4 on the chart.