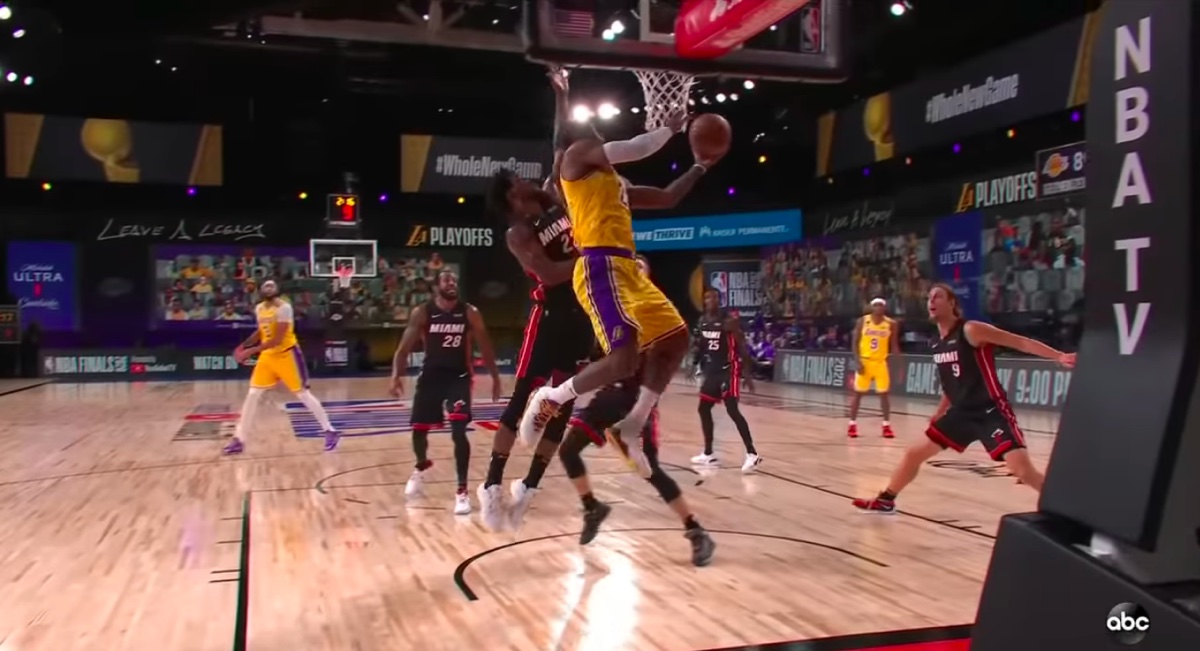 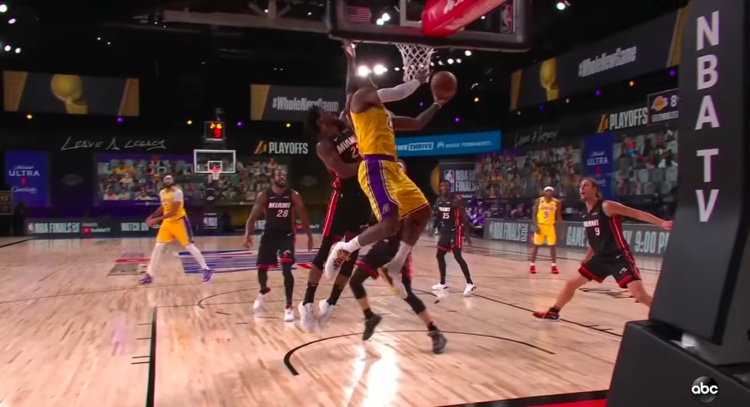 The Lakers’ Lebron James scores against the Miami Heat in an NBA Finals Game 1 match-up on September 30th.

A unexpectedly sharp NBA ratings drop could have substantial ramifications for 2021 advertising rates and music licensing fees, according to industry experts.

A substantial and sustained drop in NBA viewership numbers is now causing advertisers to recalibrate their budgets for next year, according to details disclosed this week. In turn, those advertisers are likely to pay lowered music licensing and production fees — if they remain advertisers at all.

Across-the-board, NBA ratings have been down, though a crash in viewership for the marquee NBA Finals battle between the Los Angeles Lakers and Miami Heat is elevating concerns. The Hollywood Reporter noted that 7.41 million viewers tuned in to see Lebron James and the Lakers battle the Heat in a Game 1 match-up on ABC and its network properties on September 30th. That’s the lowest figure in 26 years — and possibly, all time.

It’s also down a sizable 45 percent from last year’s Game 1 match-up between the Golden State Warriors and Toronto Raptors.

Those numbers are causing both the advertising and music licensing sectors to rethink their positions for next year.

In a discussion this week with a prominent advertising agency executive, Digital Music News learned that numerous advertisers “may be hitting pause” on 2021 NBA campaign buys, “even if just to renegotiate and win some better [pricing] terms”.  That sentiment was echoed by a rival agency, with both actively buying ads across NBA and major sports franchise seasons.

The drawback reflects a marked change, with major advertisers typically jockeying for exclusives and plum slots ahead of the next season.  That is prompting fears of a broader trickle-down into music licensing, with payouts to both music creators, direct-licensing publishers, and producers lowered given broader budget cutbacks.

Technically, the Lakers-Heat Game 1 audience is the worst NBA Finals ratings ever recorded, according to the report, though records weren’t kept prior to 1994.

By comparison, the next-lowest tally belongs to the 2003 matchup between the San Antonio Spurs and New Jersey Nets, which drew 8.06 million viewers.

The lukewarm reception came despite the presence of the NBA’s top superstar, Lebron James. Last year, James was absent from the Finals, though the high-scorer is certainly making his presence felt this time around. Also gracing the court is another huge name, Anthony Davis, who put away 34 points to lead the Lakers to a commanding win. James scored 25 while pulling down 13 rebounds.

The sizzling combo somehow couldn’t rack up the ratings score, however.  Amazingly, the Finals game almost got out-viewed by ‘The Masked Singer,’ which racked up nearly 7 million viewers on the same night. That follows a troubling showing for the NBA Conference Finals, which collectively were down 35 percent year-over-year.

The reasons for the NBA ratings drops are unclear, though several factors have been suggested.

The Finals have been substantially delayed due to COVID concerns, and played within a ‘bubble’ facility without fans. That workaround eliminated a large bloc of teams from contention, while eliminating the fan electricity that accompanies high-stakes basketball battles.

But other non-COVID factors could also be at play. For months during lockdowns, sports remained quiet, leaving many fans to find other forms of entertainment.  Outdoor activities like cycling, walking, and golfing have surged, raising the question of whether healthier, more active habits are now replacing sedentary sports-watching.

Others have pointed to the NBA’s heavy focus on racial justice protests, which could be splitting audiences. A recent Harris poll found that 40 percent of viewers are tuning out because “the league has become too political.” Another 19 percent cited the NBA’s associations with China as another reason for tuning out.

Of course, there are still several games left in the Lakers-Heat Finals series. And a stunning Game 7 finale could certainly stir things up. That possibility, according to a separate executive, is prompting a wait-and-see attitude among agencies and advertisers. That means waiting for the full 2020 result before making any decisions, even if that means missing placement opportunities.

A separate question is whether advertisers will bow out entirely. The NBA certainly draws a healthy demographic of engaged viewers, including coveted younger males, though better deals could crop up elsewhere for more predictable programs.

Meanwhile, empty stadiums are causing a crash of their own. PROs like ASCAP and BMI aren’t drawing any revenue from in-stadium plays, a problem exacerbated by lowered television and online audiences.

But this isn’t a problem that’s isolated to the NBA.

The NFL has also witnessed massive, double-digit ratings declines during its early weeks, with NASCAR also weathering serious viewer drops.  Collectively, those declines could spell bargains for advertisers next year — but a serious hit to both synch and performance royalties for the music industry.