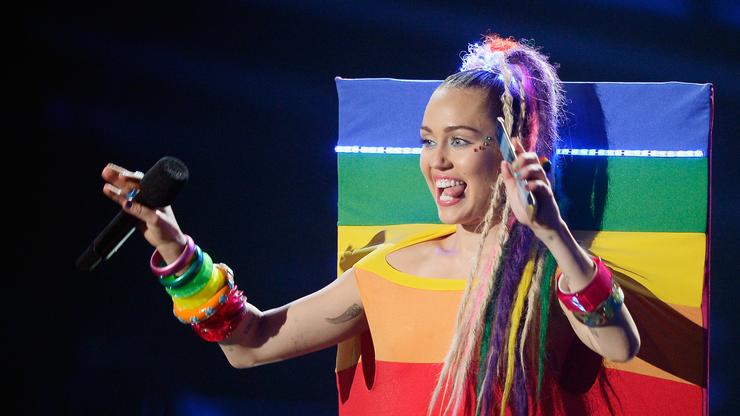 Miley Cyrus has stepped in shit once again. She recently made a rapid transition to dating Australian singer, Cody Simpson, after ending her fling with Kaitlynn Carter. After receiving some criticism for moving on too quickly, Cyrus shared a message calling out a double standard that would praise men as players for doing the same, while women are expected to sulk. She also explained that her romantic relationships will ten unfold in the public eye due to the vulnerability dating at home. Since this statement, Cyrus and Simpson have been broadcasting their burgeoning love on social media.

The latest showcasing their mutual admiration occurred on a joint IG Live on Sunday. In what was probably intended as an expression gratitude for having found a partner like Simpson resulted in Cyrus making some fensive comments. The “Slide Away” singer has been very open about her pansexuality in the past, but in the IG Live, she seemed to describe her queerness as merely a result circumstance. “I was just being a little too… I don’t know… hardcore feminist vibes and not allowing anyone in, but now I am,” she said. “There are good men out there guys. Don’t give up. You don’t have to be gay. There are good people with dicks out there. You just got to find them. You gotta find a dick that’s not a dick. I always thought I had to gay because all guys are evil, but that’s not true. There are good people out there that just happen to have dicks. I’ve only ever met one, and he’s on this live.”

Some people called out Cyrus for making queerness seem like a choice and consequently insulting gay and bisexual women. Others argued that she was simply poking fun at herself, even if it was in poor taste. Check out reactions below.