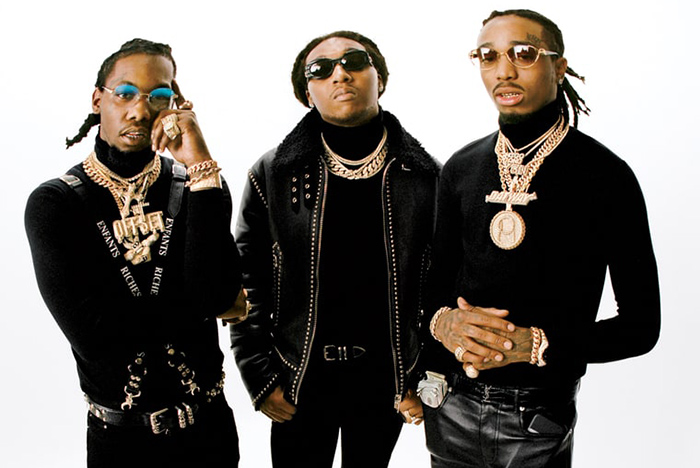 Migos is smokin’ on the cover Rolling Stone. Donning see-through coats, the Grammy-nominated trio Quavo, Offset, and Takef take puffs above a tagline that reads “High Times with the Three Kings Hip-Hop.”

Inside the issue, the “Supastars” talk about their newest album Culture II, which is due Friday (Jan. 26). According to the group, the LP was recorded around the world and it features some familiar and different sounds. “It’s still trap,” says Takef. “We got a little funkier. It’s not all the way funk. There’s still a Migos vibe.”

Offset reveals that he’s discovered the formula for success. “Even if it’s some gangsta shit, trap shit, the bitches got to like it,” he explains. “See, ‘Bad and Boujee’ was really a ladies’ record. It made all them want to stand up a little more and feel a little better about themselves. When you got the women, you got everything. If a ni**a needs to know the secret to hits, you need something that the women like.”

The guests have not ficially been announced yet, but the producer credits include Metro Boomin, Zaytoven, Murda Beatz, DJ Durel, Cardo Got Wings, Mike Dean, and additional production by Kanye West. “He did more songs],” says Takef. “We sitting on them right now, man.”

Elsewhere, Offset opens up about his relationship with Cardi B. “She is real solid,” he says. “Came from where I came from, did what I did. She’s herself, man. I seen her develop from the trenches all the way up, and I like how she did it. I respect her grind as a woman. She came to the game with some gangsta shit. I like that. I fuck with her. That’s my baby.”

They are engaged to be married, but plans are on hold. “We ain’t, we ain’t planning it right now,” he says. “We chilling. We don’t got time for that right now.”

Read additional quotes from the Q&A below.

Cardi B On Offset: “He is always taking care everybody. Like, you know when you that one person that have the money, he really take care everybody? He got to take care his babies, so he overworks himself more than anybody I ever seen.”

Offset on Wealth: “I want to have generational money. I got three kids, bro. I need all my kids to be educated and wealthy. I don’t want to be one those rappers who had it but right now they be on a TV show to keep them going. I would rather be out the scene, getting my money on Bitcoin…I bought five houses in Atlanta and I flipped them. Tripled my money. Made, like, $170,000.”

Quavo on Joe Budden: “I ain’t never had no beef with Joe Budden! I always just been, ‘Fuck him.’ It’s no disrespect when I say, ‘Fuck him.’ It’s not like, ‘Fuck him when I see him, let’s fuck him up.’ It’s like a ‘Fuck him, I’m not bothering him, he ain’t bothering me’ type fuck. It’s no beef. He’s just a man with bullshit opinions to piss the artists f. And on top that, he used to be an artist, so he knows what to say to piss us f.”

Quavo On Music, Acting, Producing Films: “I want to be part everything. In high school, I played three sports, and in the industry I’m trying to play three sports as well.”