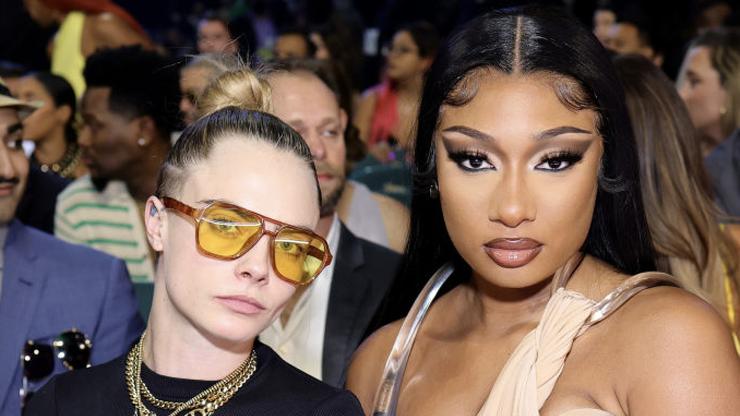 Sleuths realized that Meg may have done some photoshopping.

This year’s Billboard Music Awards was filled with plenty of interesting moments, from Megan Fox’s confession that she and Machine Gun Kelly cut a hole in her outfit to have sex at one point during their weekend in Vegas to Travis Scott’s highly anticipated performance. Interestingly enough, though, nothing made rounds on social media quite like clips of Megan Thee Stallion and Cara Delevingne hanging out together all night long.

As we previously reported, the model was hit with backlash online after footage of her throwing the train of Meg’s custom Mugler dress into the breeze in hopes of elevating her red carpet photos surfaced. While the 29-year-old seemed to be trying to help, countless users criticized her for invading the rapper’s personal space.

Once they were inside, Delevingne was in the Houston Hottie’s bubble again, this time as it was announced that the “Big Ole Freak” artist had been named Top Female Rap Artist. While she was clearly surprised to be the winner, cameras caught Cara celebrating with her and Doja Cat, also looking full of emotion.

It was clearly a busy night for the 27-year-old, who – aside from taking home trophies of her own – opened the evening with iconic performances of “Plan B” and “Sweetest Pie” in yet another custom Mugler look (this one teasing a lot more of her famous booty).

On her IG page, she shared plenty of photos from both the red carpet and inside the venue at the MGM, although sleuths at the Daily Mail couldn’t help but notice Delevingne appeared to be photoshopped out of one image that Tina Snow added to her story.

“In the image that Megan re-posted, Cara has been completely removed – and the space that she occupied has been cropped in order to make it look as though Megan and Doja were sitting right alongside one another,” the publication alleges.

In other news, Thee Stallion also recently confirmed that her next album is “95% done” – read more about that here, and tap back in with HNHH later for more hip-hop news updates.