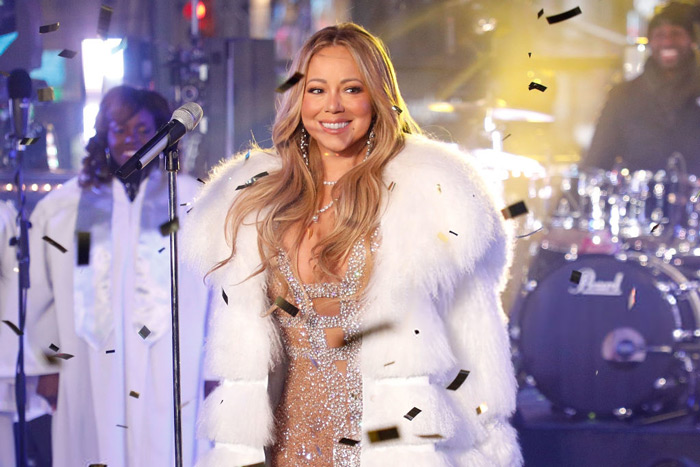 One year after a blunder-filled New Year’s Eve performance, Mariah Carey was looking for redemption with a return appearance on “Dick Clark’s New Year’s Rockin’ Eve with Ryan Seacrest.”

Decked out in sparkly earrings, a white fur coat, and shimmery gold gown, the glamorous diva took the Times Square stage in the middle record low temperatures for the celebration. Despite the shivering cold, fans happily swayed along as Carey sang her opening song, “Vision Love.”

Although this year’s show was not the debacle 2017’s New Year’s Eve performance, it still featured a viral moment, as Carey asked for hot tea before performing her closing cut, “Hero.”

“Happy new year,” she said. “I just wanna take a sip tea, if you’ll let me. They told me there would be tea. Uh, it’s a disaster. Okay. Well, we’ll just have to rough it. I’m gonna be just like everybody else with no hot tea. We’re gonna try and do this one for you because I just want to show my appreciation for everyone that speaks out for justice and tries to make the world a better place, a more united planet. You’re the true heroes.”

Shortly after the confetti-filled performance, Carey posted a photo herself sipping out a tea cup. “Found my tea,” she tweeted.

Host Ryan Seacrest asked Carey how she felt about the redeeming performance. She replied: “I’m feeling a lot better than last year, when I had to get my own police escort.”

Now under Roc Nation management, Mariah is expected to release a new album in 2018.