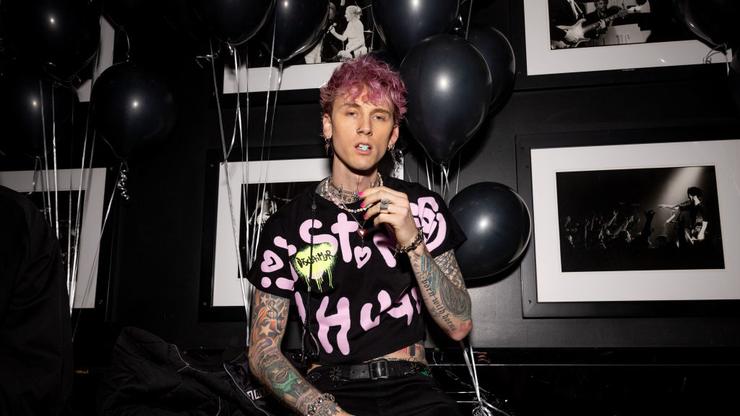 MGK cited Young Thug as one of his inspirations when he’s in the studio.

Machine Gun Kelly is returning to his roots. In a new interview with Audacy, the 32-year-old revealed that – following the success of his most recent arrival, mainstream sellout – he plans to take a break from the alternative rock genre, and start making hip hop music again.

In the earlier years of his career, MGK shared projects like Lace Up, General Admission, and BINGE before deciding to pivot from the world of rap and begin dabbling in other genres. Though he’s found success with his latest endeavours, the “Wild Boy” is hoping to flex a few of his creative muscles and push himself to further his career as an artist.

“I’m going to make a rap album for myself,” he explained. “For no other reason, no point to prove, no chip on my shoulder.” As you may know, some have criticized Colson Baker’s rap skills, starting rumours that he had no choice but to move away from hip hop if he wanted to succeed, but he’s not letting their words get him down.

“If I keep doing things to prove things to people, I’m going to one, drive myself crazy and two, not make a good product,” the Houston-born star continued. “I made Tickets and mainstream sellout because I wanted to make them. I need to now also make people miss that sound.”

Kelly shared that, after he gets back from his tour, he’ll be picking back up “where [he] left Hotel Diablo and expand on [his] storytelling as a rapper.” Ultimately, his goal is to “find a new innovative sound for the hip hop Machine Gun Kelly.”

Elsewhere in the interview, The Dirt actor cited Young Thug – who he toured with back in 2019 – as a big inspiration for the mindset he takes into the studio with him now. “I would be on the bus with him every day for hours and all he did was… He never played a beat and passed on a beat,” he said of Thugger.

“I learned that from him. I’m like, ‘I’m never going to a studio session again and being like, this wasn’t a vibe today.’ I’m laying down something every single time.”

Elsewhere in the news, Machine Gun Kelly is starring alongside his pal Mod Sun in an upcoming film called Good Mourning, which recently received a new trailer – read more about that here, and check out the rapper’s full Audacy interview above.