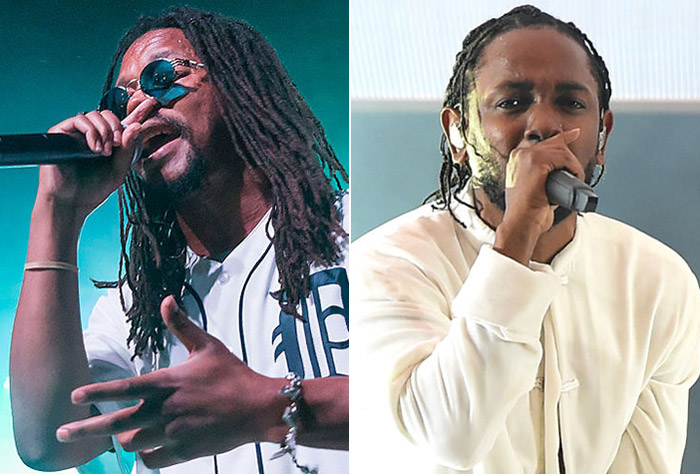 Lupe Fiasco has sparked a war words with Top Dawg Entertainment over Kendrick Lamar. The “Superstar” MC took to Twitter over the weekend to share his observations over the lead single from Black Panther: The Album.

Posting the artwork for Kendrick and SZA’s “All the Stars” next to his Drogas Wave album cover, Fiasco wrote: “Even I admit this is a little too close for comfort…damn now I guess I need a new album cover…thanx @theblackpanther.”

A few minutes later, Lupe doubled down, pointing out other allegations, including perceived similarities between untitled unmastered. and Food & Liquor II and DAMN. and Tetsuo & Youth. He also appeared to note his ninja activities in connection with K-Dot’s Kung Fu Kenny alter ego. “‘No matter how far you go…you will reflect me,’” he added. “All Black album covers, Backwards albums Ninja! Now this…I’m getting suspiciously delicious hahahha.”

Dave Free, president TDE, responded to the post with a reference to “Kick, Push.” “@LupeFiasco go kick & push yourself into a tree with these wild allegations. 😂,” he wrote. Carrera Lu responded: “I see what you did there. However it’s rather impossible to skate into a tree because most trees are located in grass where skateboards don’t actually work to well due to the wheels not really being optimal for traversing across such terrain. Now a car or say a well placed gate.”

TDE executive Punch seemingly responded to the allegations as well. “Lol,” he wrote. “Stop it. Make records baby.” Shortly thereafter, he added: “Aiight. So l almost got a lil upset earlier, then l remembered we are going against Jay Z for Album Of The Year at the Grammys. Lol. What was I thinking?”

This isn’t the first time Fiasco has spoken about Lamar. In 2012, he crowned Kendrick the “next big thing.” However, by 2014, he claimed that Logic, King Los, and Cassidy are better lyricists than K-Dot.

This weekend, Lu reiterated some these ideas. “KDot is not a top tier lyricists to me and my standards when it comes to punchlines and bars,” he added ( Complex). “His overall lyrics are good his stories phenomenal BUT punchline entire lyrically I don’t see it.”

He went on: “Also the only issues that the world thinks I have with KDot and I actually do is that i think his Control verse was wack and suer overhyped to be a verse claiming you are the best rapper. It was very weird. I was told it was just bait but still.”