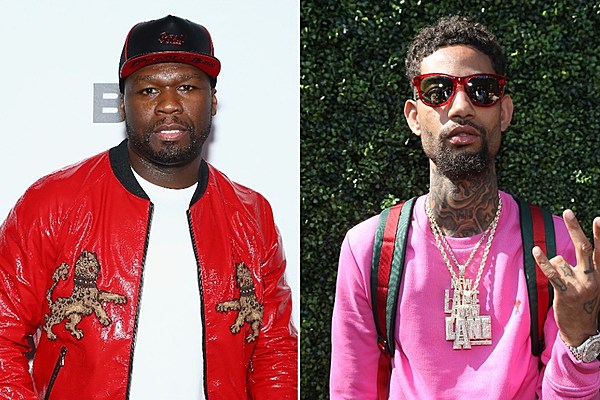 50 Cent is gearing up to drop a new record with PnB Rock called "Going Crazy," and fans are now getting a preview. The "9 Shots" rapper unveils some snippets the track on Instagram,

In one song teaser, it starts f with the 2017 XXL Freshman lacing the hook with his vocals, tapping into his gloomy side and his feelings being pushed over the edge emotionally. "It feels like I'm going crazy," PnB Rock sings. "Nothing can save me/I'm going close to the edge, hey, hey."

Soon enough, Fifty comes in with some grim bars, rapping about losing his grip after trying to take care everyone around him. "I'm exhausted, last night I lost it," the G-Unit leader raps. "Let the homies get loose, I'm sure I'ma get the lawsuit/Nana called, my grandaddy called from the blood."

Some fans might also take the song to heart, as Fifty mentions that he and his G-Unit brother Lloyd Banks don't talk anymore. His words can be heard in the second snippet the upcoming track, which you can listen to below.

"Called my son twice, he ain't picking up the phone/And Banks, we don't even talk no more," he rhymes. "You know ’cause me, he ain't have to sell crack/Never had to use no knife, never had to squeeze no strap."

There's no details on when we can expect the full version "Going Crazy" other than that it's "coming soon," but fans are already on their toes anticipating its ficial release.

This is the first track from the Power executive this year. Last year, he dropped "Still Think I'm Nothing" with Jeremih.

Take a listen to the snippets "Going Crazy" from 50 Cent and PnB Rock below.