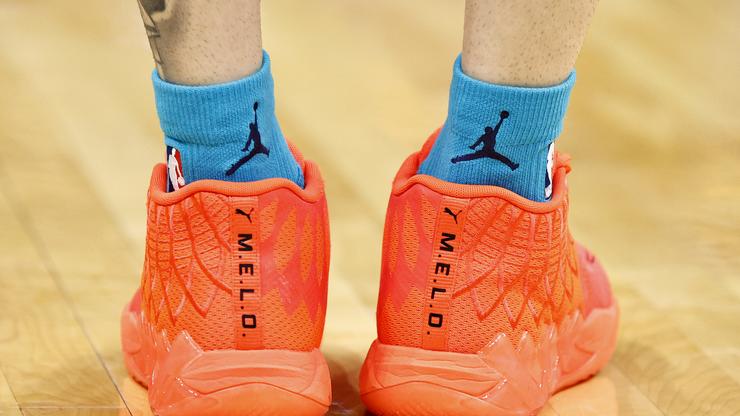 The Charlotte Hornets star will be getting his first signature shoe in just a couple of months.

Since LaMelo Ball unveiled his first signature shoe, Puma’s MB.01, a couple of months ago, hype surrounding the sneaker has built and today, fans were finally blessed with information on its official release date.

Puma announced today that the MB.01 will be released in December and will come at a $125 price point. The sneaker will be available online at Puma.com and in stores at the Foot Locker family of retailers.

Ball has been playing in the MB.01 all preseason and, compared to his older brother Lonzo’s first signature kicks with Big Baller Brand, there is a night-and-day difference.

The MB.01, which features a NitroFoam cushioned midsole with a mesh upper and a rubber outsole, has only been shown in Melo’s on-court blaze orange colorway but will come in multiple colorways and has both a feathered design along the upper and a replica of the young NBA star’s #1 tattoo on the lace garage.

Puma, who made a huge effort to get back into basketball in 2018, signing the likes of Terry Rozier, Demarcus Cousins, Michael Porter Jr. and rapper-turned-hooper-turned-rapper J.Cole, is definitely trying to ride the wave of Melo’s insane, Rookie of the Year-winning first year in the NBA and this signature sneaker is a great way to do it. The MB.01 is a combination of aesthetic flash and peak performance perfect for a player of Ball’s caliber and is perfect for a player wanting to move around the court while also being able to stop on a dime and change directions quickly.

Check out a couple on-court shots of the MB.01 below and let us know what you think of Ball’s first signature sneaker in the comments.