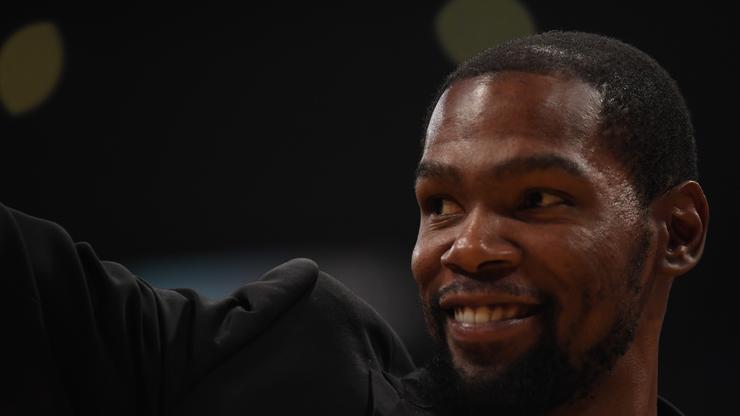 Kevin Durant has had a very interesting career in the NBA, to say the least. The start of his career was spent in Seattle with the Supersonics, who eventually moved to Oklahoma City. From there, Durant spent some successful seasons there, although a title continued to elude him. As a result, KD left OKC for Golden State in 2016. That’s when Durant went on to win two straight NBA titles with the Finals MVPs to match. Last summer, KD left Oakland and opted for a stay in Brooklyn where he is now a member of the Nets.

Both the Warriors and Thunder fanbases have a whole lot of contempt for KD, which has led to some boos, as well as some slander on social media. Durant indirectly addressed all of this while appearing on The Players’ Tribune’s “Text Message Talk Show. As you can see in the screenshot below, Durant replied with a pretty hilarious meme when asked which fanbase he prefers between OKC and Golden State. Clearly, he knows whatever he chooses will get him in trouble.

While Durant has been in the building for Nets games, he has yet to be able to experience their energy while he is on the court. During this upcoming season, it’s clear Durant will be in for something new. Hopefully, his relationship with the Nets faithful can remain fruitful.