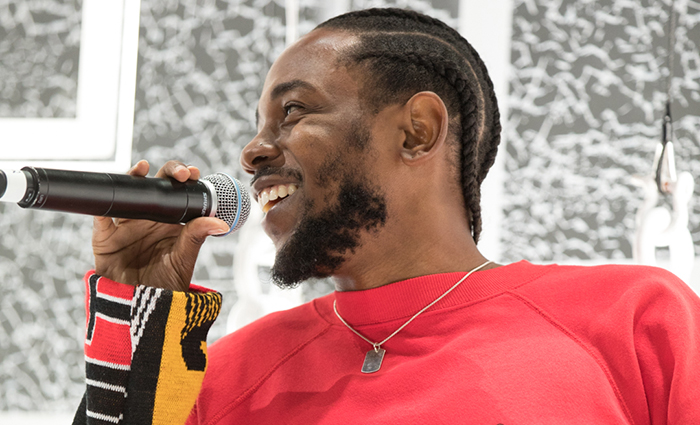 Shortly after announcing that he would be curating and producing the Black Panther soundtrack, Kendrick Lamar previews a collaboration with Vince Staples in a new trailer for the Marvel film.

The action-packed teaser, which debuted following Kendrick’s performance at the 2018 NCAA Football Playf National Championship, features the new banger intermixed with high-powered special effects. “Y’all all want money, all y’all want from me,” raps K-Dot. “Y’all wanna die in the shade things / We all gon’ die, embrace the thing / Watch me do my shit.”

Long Beach’s Staples accompanies Compton’s K-Dot on the track’s “cops on the radar” hook and then provides his own verse. “They don’t wanna see me getting to some check,” he raps. “They just wanna see me swimming…Don’t drown home bound, ones to ya head / 911, freeze ‘fore you forget.”

Starring Chadwick Boseman, Michael B. Jordan, and Lupita Nyong’o, Ryan Coogler’s Black Panther is set to hit theaters Feb. 16, while the Kendrick and TDE-led soundtrack (featuring the lead single “All the Stars” with K-Dot and SZA) is scheduled to arrive Feb. 9.