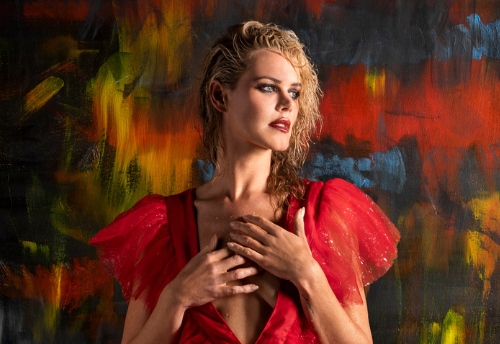 Talented actress and singer-songwriter, Kelly Monrow got people talking with her powerful debut album Scars of Venus. The Southern Rock/Americana record that includes the tracks “Wake Up,” “Ain’t Mine,” “Jagged Heart” and “The Woman,” came out in October, earning the artist media attention and recognition.

In a recent interview, the Texas-native stated that she started working on Scars of Venus last October, “it’s been a full year in the making. This album has been such a testament to putting my mind to something and following through on it. She explains, “I started singing and writing during Covid and when life got back to semi-normal, I promised myself I would keep writing and pursuing music and I am so glad I made that decision. This album is a collection of songs of me stepping into womanhood and owning my past.”

Speaking of her contributions and input to the creative process of the music videos, Monrow says, “I know exactly what I want for each video. For “The Woman” video, I teamed up with a dear friend who is a director and owns a creative agency, Lanz Pierce. She came up with the concept and we shot that one. She also helped with “Jagged Heart” but I always know exactly what my vision is for each song. It’s my real joy as an actor to be creating this narrative in the music industry now.”

Alongside her successful music releases, Kelly Monrow is also flourishing with her acting career. She has a movie coming up and is currently working in Austin, TX recording some new material. The incredible performer is all packed with shows in 2023. She invites everyone to come and see her band, “They are some badass musicians from Austin and we are just getting started.”

Listen to the full album here: