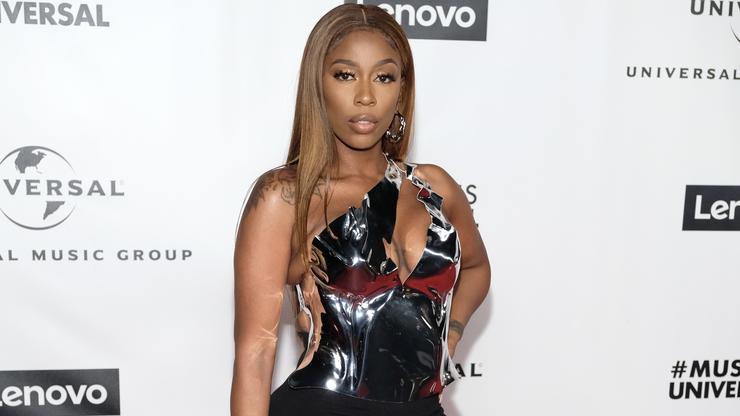 The “BMF” star hasn’t given birth yet.

“Don’t try me when I’m outside,” 32-year-old Kash Doll told followers tuning into a recent live stream, during which she addressed the hateful comments she’s been receiving about her journey into motherhood.

“Y’all sit up here and stalk me, stalk everything about the baby to talk shit. He’s not even here yet! That’s why I’m not posting him,” she clapped back, shutting down those who’ve been speculating about the BMF actresses’ personal life.

As reported by Bossip, Kash Doll has decided to name her unborn son Kashton Prophet Knight Richardson, which some have regarded as “ghetto.” To that, the “Ice Me Out” rapper says, “It’s giving obsessed, and then going to be mad when I don’t upload him. Kids are off limits.” She went on while folding baby clothes, adding “if whatever it is [is] ghetto, so what? I’m ghetto. I’m from the hood. Let me be ghetto in peace!”

The soon-to-be mother has also addressed criticism on Twitter, responding “he’s not your child, be a fan of your child” to a person who shared a post about “not being a fan” of the recording artist’s baby name of choice. “How u mad I’m naming my baby Kash when where the hell u get Kash from?” she tweeted a few weeks earlier.

Kash Doll admitted that she wasn’t sure why false reports of her having had given birth were trending, seeing as she’s still very much pregnant. Later in the live stream she once again addressed the haters with, “it’s always the broke and bothered. And here my dumb ass goes, rich and bothered. Why am I letting these broke and bothered people bother my rich ass? I’m crazy! I think it’s because it’s my kid.”

It remains unclear when the Detroit native is due to give birth, but we certainly can’t wait to see how people react to whatever name she gives her son.

See footage from Kash Doll’s ultrasound from a few weeks back here.