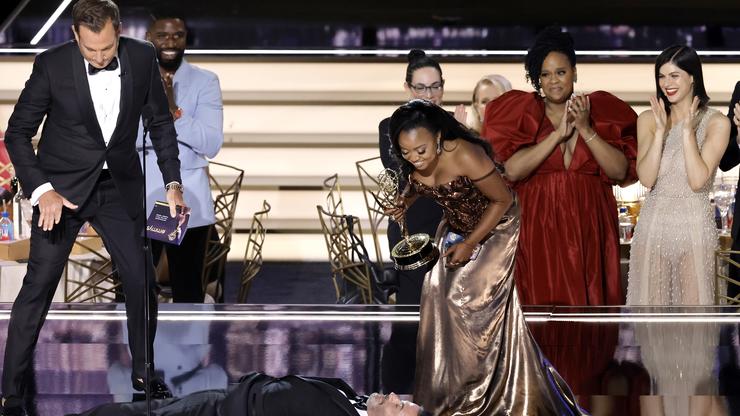 Jimmy Kimmel received heat from fans around the globe after a distasteful comedy skit he attempted during the Emmys. During Quinta Brunson’s acceptance speech, Kimmel laid flat across the stage while Brunson had to awkwardly step over him to reach the microphone. Will Arnett would go on to explain to Brunson and the audience that Kimmel was displeased that he lost again and decided to get excessively drunk off backstage margaritas.

While Kimmel is known as one of the kings of comedy, he has had his share of misses.

Kimmel is well remembered for his interview with Kanye West where he repeatedly questioned the rapper on his opinion of Donald Trump. Kanye is famous for his previous blunt statements against President Bush, where he claimed “Bush doesn’t care about black people.” Eventually, Jimmy straight-up asked Kanye why he believed there was any difference between the two presidents and why Kanye thought Trump “actually supported the black community.” Kanye sat silent for a few seconds before Kimmel awkwardly cut to a commercial.

Kimmel also had embarrassing moments with Megan Fox as far back as 2009.

When Megan starred on the late-night show, all was going well until Kimmel began asking about her experiences with Director/Producer Michael Bay. She opened up to Jimmy and explained how she was directed in an inappropriately and oversexualized manner by Michael when she was as young as 15. Jimmy laughed at this and commented that this was “how all of our minds work.” Megan was visibly bothered by this as Jimmy moved along to the next question.

Kimmel has made public apologies before following obvious errors of judgment, and Quinta Brunson’s Emmy speech is no exception. As soon as Brunson walked offstage Jimmy was quick to realize his comedic blunder, hurrying to apologize to the award winner, saying…”it was a dumb comedy bit that we thought would be funny.”

Jimmy would go on to further apologize to Quinta when she joined him on his late-night talk show.

“I lost, and then I drank too much, and I had to be dragged out on the stage. And then people got upset. They said that I stole your moment, and maybe I did. I’m very sorry if I did do that — I’m sorry I did do that, actually.”

Check out the new clip with Quinta below.