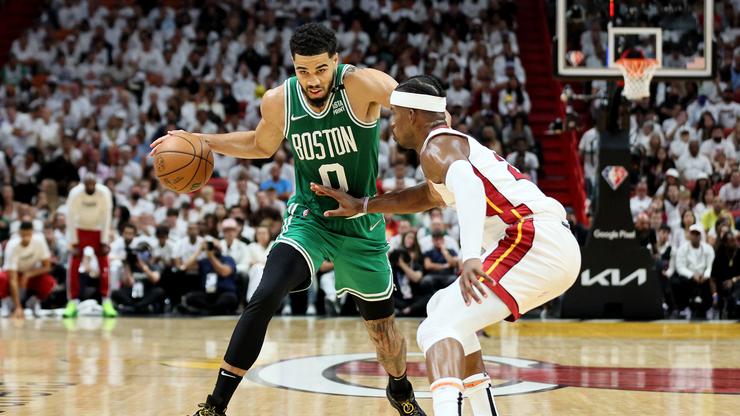 Jimmy Butler has a ton of respect for Jayson Tatum.

Jimmy Butler and Jayson Tatum put on a show in the Eastern Conference Finals. The Celtics ended up winning the series last night in a very close Game 7, however, Butler and the Heat put up an amazing fight. This is a series that went back and forth as the Heat held the series lead twice while the Celtics had a 3-2 lead going into Game 6. Needless to say, there was a lot to be excited about throughout the series.

In Game 7, Butler scored 35 while Tatum scored 26. While Butler may have had better individual stats, there is no doubt that Tatum and his team had a better overall showing. Now, the Celtics will play the Warriors in what should be a phenomenal NBA Finals series.

After the game, Tatum and Butler shared a moment on the court. Usually, this is where two players share kind words about the series that was just played. There was absolutely no bad blood here and in the clip below, you can hear Butler tell Tatum “Always, my dawg. That’s your title dawg. Congrats on the win… You deserve this sh*t… Love, bro.”

The Celtics will now look to take down a Warriors team that is looking for its fourth title in seven years. It is going to be a tough task but if any team can do it, it’s this Celtics squad.