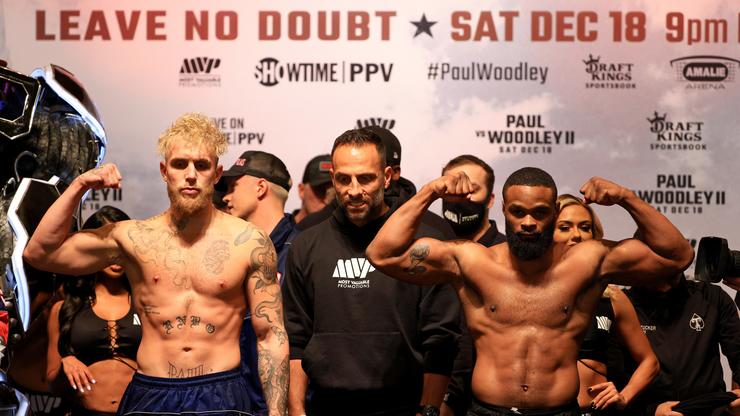 Paul vs. Woodley 2 goes down tonight.

At first, tonight’s fight was meant to be between Paul and heavyweight champion Tyson Fury’s half-brother Tommy Fury. However, at the beginning of December, Fury had to back out of the fight because of a rib injury, and was immediately replaced by Woodley who had been training.

Jake, Tyron and Jake’s brother Logan blasted Fury, accusing him of cowardice for backing out of the fight. And, in the pre-fight walk-out tonight, Jake has something special planned to rub it in Tommy’s face even more, he told TMZ: “I have a message to send to him during my walkout. People will see my message for Tommy Fury while I’m walking out. It’s pretty funny.”

The first time Jake Paul and Tyron Woodley fought was in last August, as it was Woodley’s first boxing match ever. Paul won in split decision, and told Woodley he would only agree to a rematch if Woodley got a tattoo dedicated to Jake, which he did.

Now, the rematch is on, and Jake does not foresee any outcome that leads to a Woodley victory: “I’m feeling really good. To me, it doesn’t matter who I fight and this is an opportunity to right my wrongs. Last fight, obviously, I still won. But now, I wanna knock him out. That’s a big opportunity to show people how much better I’ve gotten since then.”

What do you think Jake has in store to diss Tommy Fury?