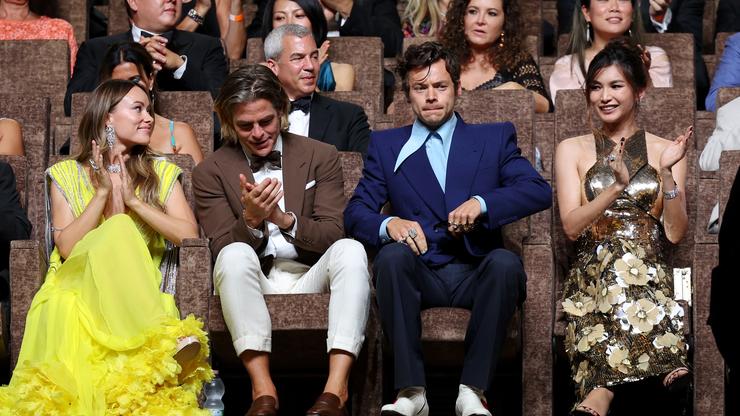 Amid the seemingly endless drama surrounding Olivia Wilde’s upcoming film, Don’t Worry Darling, some fans now believe that Harry Styles spit on Chris Pine during the movie’s premiere at the Venice Film Festival on Monday. The incident was caught on camera as the “Watermelon Sugar” singer was taking his seat in the crowd.

It appears that Styles makes a quick glance at Pine, who looks down at his lap as if something landed on it and begins smirking. Neither Styles nor Pine has commented on the viral clip, and fans have since begun debating on social media whether Styles did or did not spit.

Earlier in the weekend, a video of Pine’s reaction to Styles’ comments during a press conference at the festival had gone viral.

At the same press conference, Wilde was asked about her alleged feud with Florence Pugh. The director labeled the drama “endless tabloid gossip.”

“As for all the endless tabloid gossip and all the noise out there, I mean, the internet feeds itself,” she said. “I don’t feel the need to contribute. It’s sufficiently well nourished.”

She also labeled Pugh “a force,” adding, “we are so grateful that she’s able to make it tonight despite being in production on Dune.”

Wilde also avoided a question about Shia LaBeouf, who was originally cast to star in the film.

Pough had sat out the press conference, saying that she was on a late flight from the set of Dune: Part Two.

Don’t Worry Darling is scheduled to hit theaters on September 23.

Check out a clip of the incident below.