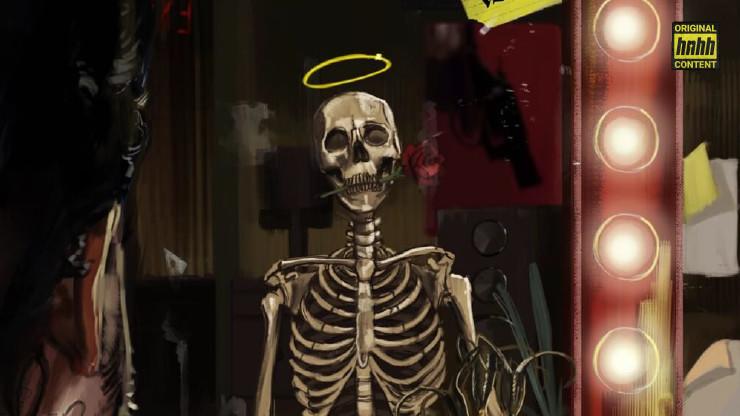 “I Died For This!?,” Grip’s Shady Records debut, is an impressive concept album that makes great artistic choices and offers plenty of thought-provoking sentiments.

Politics within the music industry can cloud how consumers both understand and digest a record; from the formal announcement of a label signing to the language used when marketing a body of work. That being said, when approaching Grip’s Shady Records debut, I Died For This!?, be aware that the album is not the result of a novice hard at work on their first full-length project. ”The Atlanta-based artist even alludes to that assumption on “At What Cost?,” on which he raps, “They act like I just started rappin’ yesterday/Fact of the matter is, you niggas just started pressin’ play.”

After earning critical acclaim for albums like 2017’s Porch and 2019’s Snubnose, Grip’s I Died For This!? has arrived at a special moment in his career, as he is being introduced to a more mainstream audience alongside an exigent co-sign from Eminem. As a result, Grip is currently in a unique position with heightened expectations surrounding his work, and while I Died For This!? documents his come-up in a way that a traditional rap debut typically would, his Shady Records debut, more importantly, offers an intriguing perspective on the music industry as a whole.

The Stray Society artist’s latest effort is a conceptual album that explores the dichotomy of listeners who are looking back at a dead artist’s life, while simultaneously seeking entertainment from his hard-fought journey. Thus, I Died For This!? is formatted like a theatrical production, starting with an orchestral overture, followed by the reading of Grip’s eulogy, and eventually closed with a disturbingly loud roar of applause. This overarching conceptual approach allows Grip to introduce himself to fans on a bigger stage and also throw in thought-provoking gems, like how he repeatedly comments on the way that Black music is consumed, criticized, and monetized.

Listeners can hear glimpses of that underlying theme on the Wara-assisted single “Gutter!,” most notably when he raps, “What would you do if you came from the gutter/To a game to get some change in exchange for your struggles?/And you sang ’bout the pain that pertain to your color/Just for it to get appraised by some lame motherfuckers.”

On the album closer “Pennies…Exit Stage Left!?,” Grip is literally screaming for listeners to consider how mentally and emotionally taxing the exchange of personal trauma for commercial gain must be. The song’s hook confronts listeners with the concept one last time as Grip yells, “Trade pennies for my pain, are you not entertained!?/Sweat, tears, bloodstains, are you not entertained!?” Saying that to fans immediately after giving them incredible tracks with guest artists such as Eminem, Royce da 5’9”, AHYES, and Wiley from Atlanta is a gutsy move from the new Shady Records signee, but it’s sure as hell effective.

As I Died For This!? concludes with deafening applause, it’s clear it is a top-tier rap album from a rapper who appears to already be jaded from the music industry altogether, despite this being his major label debut. From the tongue-twisting lyricism to the expert storytelling, I Died For This!? is undoubtedly an album that only a seasoned and skillful rapper could put together, but what makes it a standout release is Grip’s soulful way of conveying his inner conflict — especially on “At What Cost?” and the Big Rube-assisted “Enem3?” — as an emcee who loves the art form but isn’t in love with the industry.

But like his listeners, Grip is human, and as he chants on the album’s thumping track “The Lox!,” he wants what Jadakiss, Styles P, and Sheek Louch named their debut album after: money, power, and respect. Therefore, the grind continues, and the back-to-back tracks “A Soldier’s Story?” and “Walkthrough!” cleverly illustrate how fast a situation can drastically change for a struggling artist. In the soliloquy that is “A Soldier’s Story,” Grip drops a bar for the ages: “My hunger to be regarded as the best is what’s starvin’ me to death.” And just one song later, he’s holding his own against a guest feature from Eminem. “Walkthrough!” is a monstrous track that’s a hit on its own, but Grip’s moment of full realization and Eminem’s firsthand wisdom combine in a way that surprisingly further hammers home the concept of I Died For This!?

A widespread sentiment within Hip-Hop is that artists don’t actually get their flowers until they are no longer around to appreciate them, and Eminem echoes that on “Walkthrough!” by rapping, “And if you don’t ever stop to smell the roses/I do know one thing, that’s for sure/You don’t get your flowers ’til you’re pushin’ up daisies (No)/And that’s about all your ashes earn.” On his Shady Records debut, Grip makes great artistic choices and plenty of profound statements, yet his ability to weigh a starving artist’s hopes for riches and dreams of influence, against the bleak reality of a vulturish music industry is his greatest achievement on I Died For This!?