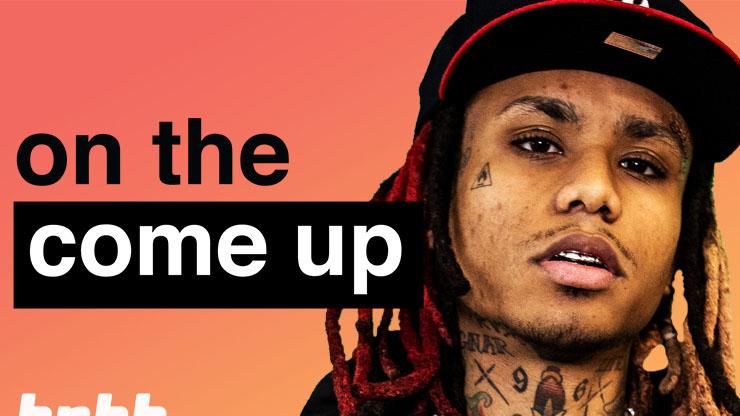 Gnar is creating a whole wave.

Gnar is trying to take over the world. If there’s anybody from Atlanta that genuinely stands out from the crowd, it’s Gnar. After being born in Oakland, he relocated to ATL and has hit his stride ever since arriving. From a young age, Gnar knew that he would be involved in the music world. Many his fans first became acquainted with the rapper through his clothing design and role in the skateboarding scene. Unlike most his contemporaries, Gnar has his hands in a lot different bags. He’s still prominent in the skateboarding community, he’s running a successful brand called Gnarcotic and he’s now rising high in the music world. This week, Gnar stopped by the fice to chat about his ascent to the top, becoming the latest subject On The Come Up.

Gnar, formerly known as Lil Gnar, changed his name months ago when he realized that the prefix was no longer necessary. “I don’t really introduce myself as Lil Gnar,” said the artist. “I just say Gnar anyways so it just made sense.” In the last year, Gnar has matured a lot and grown both physically and mentally. Standing over six feet tall, Gnar is not “lil” and his music isn’t either.

After the release “Death Note” with Lil Skies and Craig Xen, Gnar can be looked at as a serious threat. His most recent hit single has taken the world by storm and it has been one his most successful cuts. But the Atlanta resident knew that he would always make it to this stage his career. Despite his unconventional start, music was always in the cards.

“I been knew I was gonna rap,” says Gnar. “I been making music. The whole time I was making clothes, I was making music. I just didn’t put it out there. I haven’t publicly been a rapper for mad long but I been knew I was gonna rap.” Everybody has a different way getting started. Gnar wanted to ensure that he could build a solid base for his success, which includes skating and clothing. He calls Gnarcotic his brand and Gnar Life his movement, truly creating something that fans can relate to and hoping that it all can translate to the music. So far, it has.

His name derives from the graffiti scene in Atlanta and, if you’re ever in the area, you should keep an eye out for any his tags. He makes it clear that he’s always been interested in creating a “whole planet” for people to escape to. From graffiti, to fashion, to music now, Gnar knows what he’s got and he’s banking on himself. Stay tuned for what’s to come because, in the near future, Gnar has been shifting his style to reflect his inner thoughts more personally. There is more melody in his work, more emotion and more rawness. In addition to some cuts on the way with Joji, Gnar has a lot planned for 2019.

Follow Gnar and the rest our On The Come Up artists on Spotify below.