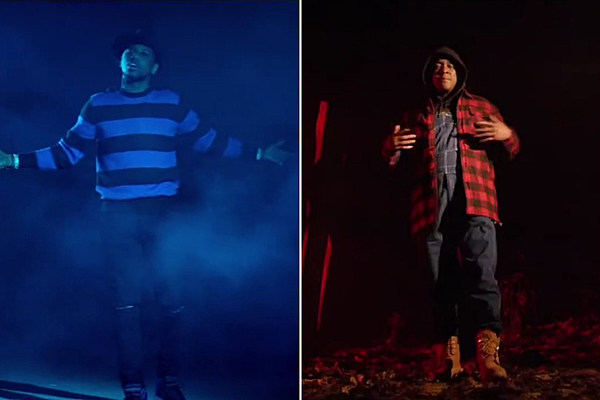 We may be months away from Halloween, but Fabolous and Jadakiss are still trying to instill fear into viewers with their latest video for "F vs. J Intro."

The standout track from the rapper's Friday on Elm Street album gets a horror-inspired video from director Gerard Victor, which features Fab and Jada turning into their Freddy Krueger and Jason Voorhees personas.

The first half the video features Fab in a full Krueger outfit, right down to the claws. Like the movie Freddy does, Fab chases a woman in her dreams before catching her. The visuals then switch to Jada who chases after a young couple with his black machete. The rapper kills both people, chopping at them with his weapon.

According to Fabolous, the idea for the project came from the two freestyling together in the past. "You can take that chemistry and see that we’ve been able to do records," said Fab. "It’s not like putting NSYNC with DMX. We got mutual respect for each other. We’re fans each other’s music and art."

Fab also teased a sequel for the project, telling XXL, "I feel it can be traditional. The same way Thanksgiving meals is traditional, you might need this every once a year. We'll see."

Check out the "F vs J Intro" video below.