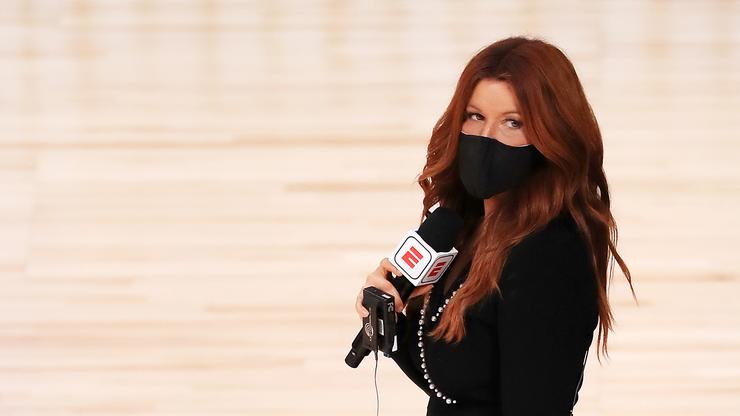 “The Jump” is canceled as Rachel Nichols is removed from ESPN’s NBA coverage.

In a shocking turn of events, ESPN‘s daily talk show The Jump has been canceled, and it turns out that the show’s abrupt cancellation also coincides with ESPN‘s removal of veteran reporter Rachel Nichols from all NBA coverage. The sports network’s decision comes nearly two months after Nichols’ controversial rant about ESPN‘s “crappy longtime record on diversity” went viral. In response to being replaced on NBA Countdown by Maria Taylor, Nichols argued that her Black colleague was solely put in that position because of her race.

“I wish Maria Taylor all the success in the world — she covers football, she covers basketball,” Nichols was heard saying in the audio leaked at the top of July. “If you need to give her more things to do because you are feeling pressure about your crappy longtime record on diversity — which, by the way, I know personally from the female side of it — like, go for it. Just find it somewhere else. You are not going to find it from me or taking my thing away.”

Upon the audio leaking, many ESPN fans and contributors publicly criticized Rachel Nichols for making those comments, and although she apologized to Maria Taylor on a televised episode of The Jump, ESPN has ultimately decided to drastically reduce the veteran sports journalist’s role. According to CNN, the network has barred her from all NBA coverage and canceled The Jump after five years.

David Roberts, ESPN’s senior vice president of production, reportedly told CNN, “[Both sides] mutually agreed that this approach regarding our NBA coverage was best for all concerned. Rachel is an excellent reporter, host and journalist, and we thank her for her many contributions to our NBA content.”

According to CNN, this marks the second high-profile exit at ESPN following Maria Taylor’s last month, and it also comes at a unique time, considering that Rachel Nichols still has more than a year left on her contract with ESPN. In a new statement via Twitter, Nichols addresses The Jump‘s cancellation, and she appears to be in good spirits despite the recent news.

“Got to create a whole show and spend five years hanging out with some of my favorite people [red heart emoji],” she recently tweeted. “Talking about one my favorite things [basketball emoji] An eternal thank you to our amazing producers & crew – The Jump was never built to last forever but it sure was fun. More to come…”

With this news, it definitely looks like the end of an era for Rachel Nichols. Do you think ESPN made the right call by removing her from NBA coverage and canceling her daily talk show?