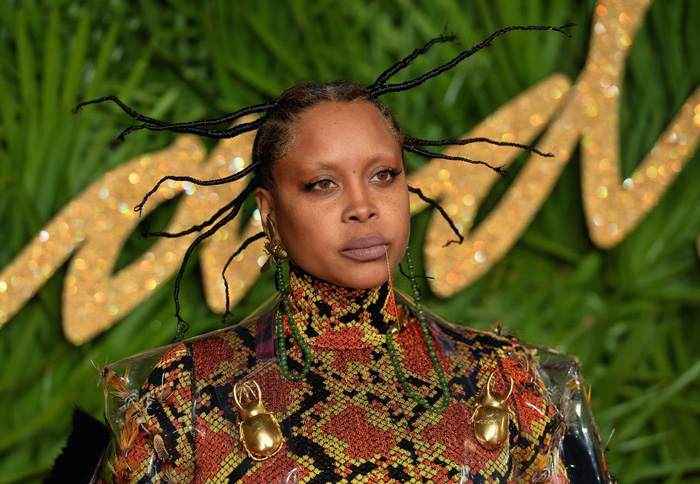 Erykah Badu is raising eyebrows for her controversial comments about Adolf Hitler.

During an interview with Vulture, the neo-soul singer spoke on a variety topics, including anti-Semitism. “I’m not an anti-Semitic person,” she said. “I don’t even know what anti-Semitic was before I was called it. I’m a humanist. I see good in everybody. I saw something good in Hitler.”

She continued, by calling Hitler “a wonderful painter,” before being questioned by the interviewer. “Okay, he was a terrible painter,” she replied. “Poor thing. He had a terrible childhood. That means that when I’m looking at my daughter, Mars, I could imagine her being in someone else’s home and being treated so poorly, and what that could spawn. I see things like that. I guess it’s just the Pisces in me.”

She agreed that her opinion usually isn’t the popular one, but she said she didn’t understand why she couldn’t praise the Nazi figure openly. “I don’t care if the whole group says something, I’m going to be honest. I know I don’t have the most popular opinion sometimes,” she said. “Why can’t I say what I’m saying? Because he did such terrible things?”

In the past, Badu was accused being anti-Semitic after traveling to Palestine. “I’d gone to Palestine and journalists asked me, ‘Do you believe in Louis Farrakhan? Do you follow him?’ Sure I do. I’ll follow anyone who has positive aspects,” she said. “He single-handedly changed half the Nation Islam to clean eating, clean living, caring for their families. He has flaws — like any man — but I’m not responsible for that. I said I’ve appreciated what he’s done for a lot black Americans. I mean, I’m not Muslim, I’m not Christian, I’m not anything; I’m an observer who can see good things and bad things. If you say something good about someone, people think it means that you’ve chosen a side. But I don’t choose sides. I see all sides simultaneously.”

Her support for Farrakhan was seen by some as anti-Semitic at the time, a notion that caught Badu f guard. “I was so surprised when I read that people thought I’d said something anti-Semitic,” she added. “I went to Palestine because I cared about the Palestinian children, and I was there doing work for them. Then someone twisted what I’d said around and made me into a villain or something.”

Badu’s comments about Hitler have received criticism across the internet. In apparent response to the reactions, Badu simply tweeted: “Sheeeeit.. ion know.” Read additional comments from her controversial conversation, including her thoughts on Bill Cosby, XXXTentacion, and Louis C.K. below.

On Music She Listens To: “I’m listening to new things I’ve recorded — seeing if they might lead to bigger ideas. I’m also listening to DRAM and Lil Uzi Vert. All new stuff because Seven. XXXTentacion is another one.”

On Bill Cosby, Louis C.K., and XXXTentacion Allegations: “I would have to really think about it and know the facts in each those situations before I made a judgment. Because I love Bill Cosby, and I love what he’s done for the world. But if he’s sick, why would I be angry with him? The people who got hurt, I feel so bad for them. I want them to feel better, too. But sick people do evil things; hurt people hurt people. I know I could be crucified for saying that, because I’m supposed to be on the purple team or the green team. I’m not trying to rebel against what everybody’s saying, but maybe I want to measure it. Somebody will call me and ask me to come to a march because such and such got shot. In that situation I want to know what really happened. I’m not going to jump up and go march just because I’m green and the person who got shot is green. The rush to get mad doesn’t make sense to me.”

On Her Reputation with Rappers: “I take advantage it. It’s a good thing if people think I’m supposed to be some mystical creature that controls people’s minds. I keep the prestige going. I keep up the idea that I’m mystical. The thing about this legend is, I get blamed if rappers do good or do bad — people think these rappers get all confused by my presence. That I take rappers to the sunken place. I don’t think that’s what I do. I hope it’s not.

On New Music: “I’m thinking about music, but it’s all about tuning forks, singing bowls, bells, drums. I went to South Africa and recorded drums from Soweto, from Johannesburg, just gathering sounds. That’s what I’m interested in right now — sound vibration. If I put out another project, it’ll be like that. Maybe I’m humming or primal wailing or tribal moaning. You know, I haven’t written anything in five years.”

On Lauryn Hill, André 3000, & D’Angelo: “I don’t want to speak for those people. I know all them, and there are individual circumstances for why each them were quiet in different moments…D’Angelo did what he came to do. He never had to make another record. Lauryn continues to make music. I don’t think she’s putting it out, but she’s always recording. I think we have something in common, us neo-soul musicians, and that’s honesty. Making music hurts, or it feels good, and we do it when we have to. And sometimes we don’t.”

On Politics: “My younger kids] talk with me about it. They say the typical little girl things like ‘Trump’s a mean man and he wants to send my friends back to Mexico.’ We don’t elaborate any more than that, because that’s all that they need to be preoccupied with right now. But I’m not a political chick at all. I’m macrocosmic in lieu microcosmic. I see a whole big picture. I see freedom for the slaves and the slave masters. For everybody. We’re just emerging into a new state being altogether, and the anger now is about people scared that change. What I’m talking about is Baduizm, and I see Trump as part the resistance to that.”

On Trump: “The thing about Trump is that he’s a bad guy to the point where it looks manufactured. Are we playing games here? He can’t really be that bad. I’m not a conspiracy theorist at all — I don’t give a shit about that stuff — but it looks like Trump’s just trying to spark division. It looks like a game. Why are we being toyed with?”