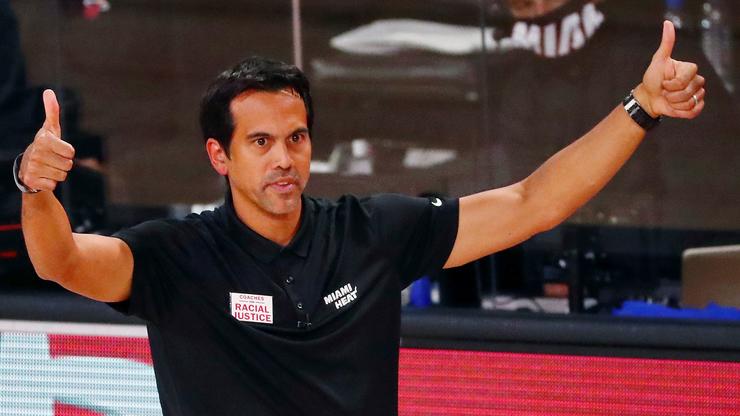 Erik Spoelstra says the Heat don’t care what anyone has to say about their chances of beating the Lakers.

Heat head coach Erik Spoelstra says the team isn’t worried what anybody else thinks following their 124-114 loss to the Lakers in Game 2 of the NBA Finals.

“We don’t give a shit what everybody else thinks,” Spoelstra said after the loss. “What will it take? Whatever is necessary. Simple as that. If you want something badly enough, you’ll figure it out. Our group is stubborn, persistent, and we just need to figure out how to overcome this opponent.”

Overcoming the team’s 0-2 deficit will be difficult considering they lost two of their key players during Game 1. Both Goran Dragic and Bam Adebayo were absent for Game 2 and their status for Game 3 has not but confirmed.

“We’re never giving up,” Jimmy Butler said. “We’re going to fight, and we’re going to ride with this thing ’til the wheels fall off. It’s not over. We’re just down 0-2; we got to do something special. We’re capable of it. I wouldn’t want to be in the trenches with any other guys except for the ones that we have.”

Butler scored or assisted on 57 of the Heat’s points in Game 2.

“We believe in one another,” Butler said. “We got to play damn near perfect in order to beat those guys. We’ve yet to do it. And if we don’t do it soon, it’s not going to be pretty.”