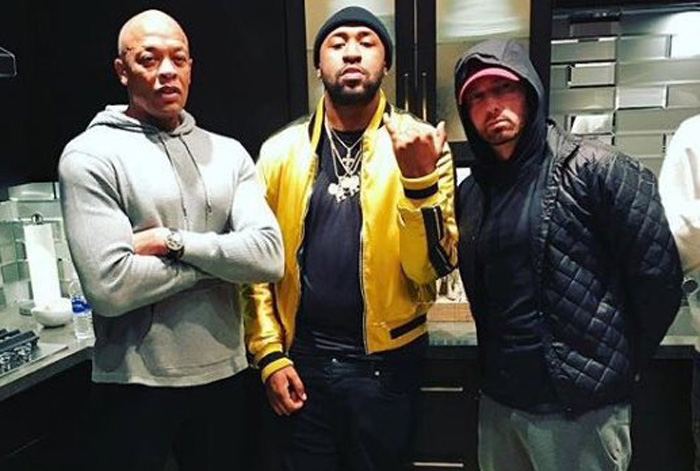 Still blazing f Revival, Eminem is back in the lab with his longtime mentor Dr. Dre and Mike WiLL Made-It.

The Good Doctor teased the collaboration by promising “real motherfuckin’ hip-hop” Snapchat. Jokingly, Marshall Mathers pointed at himself and yelled out, “Fake hip-hop here.” According to the EarDrummers boss, the meeting the minds took place in Detroit.

Mike added a few Eminem and Kendrick Lamar references to the mix in his caption. “I ONLY NEED 1 SHOT I WONT MISS MY CHANCE TO BLOW , CAUSE OPPORTUNITY COMES ONCE N A LIFETIME,” he wrote. “STILL HUMBLE, ON GOD! … BIG 2018.”

Em posted his own photo from the session featuring Dre. The caption to his flick read: “Still Aftermath!”

Meanwhile, Mike WiLL has been teasing new music in recent months, posting photos himself in the studio with JAY-Z, Swae Lee, and YG. “BIG CONVOS 2018,” he wrote under his Hov picture. “NOTHING SMALL, NOTHING.”