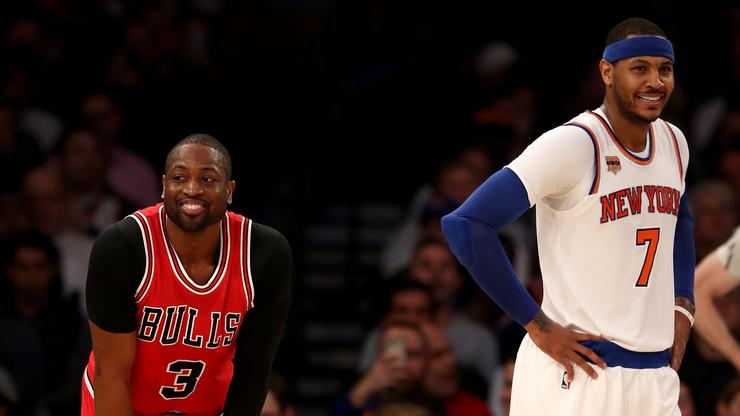 It’s been well documented this Summer that Carmelo Anthony has struggled to find a new contract in the NBA. Anthony has been looking for the right fit for months now and it doesn’t seem like there are any teams out there willing to take a waiver on him. The former Knicks superstar has some theories as to why teams may not want him, although it’s extremely peculiar to see so many franchises pass up on his services. Even if he isn’t good enough to be a starter, Melo is certainly good enough to make at least one team in the league.

Dwyane Wade was asked about Melo’s struggles recently and as you would imagine, he’s a bit confused by it all. Wade is adamant that Melo should be in the league right now and is hopeful something can be done sooner than later.

“He’s a brother mine and a great friend and I’m just very disappointed that he’s not in the NBA because he doesn’t deserve that as a person. Melo is one the best individual people I know and a lot people don’t know that because things that have been said about him in the past. Hopefully he gets an opportunity to be with a team this season because he has a lot to still fer the right team in the right role and the right situation. I want him to be able to end his career the way he wants to end it. He deserves that as someone who has carried the torch for this game and done so much for the league and Team USA in the Olympics. He deserves better than this.”

With the NBA season starting next month, it will be interesting to see if Melo can finally get a deal and receive the farewell tour he craves.