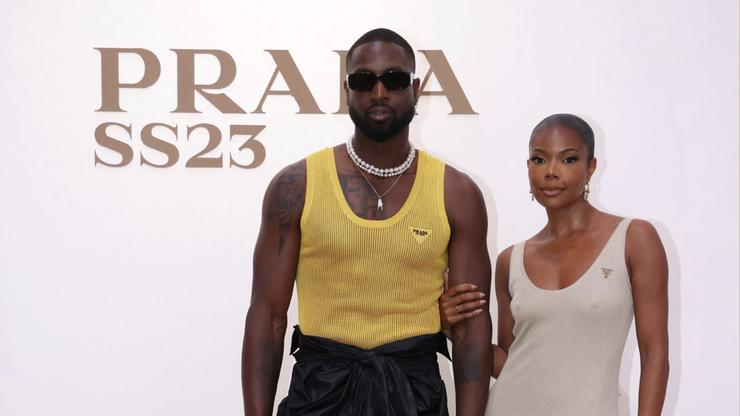 The couple’s coordination for Milan Fashion Week has fans in awe.

It’s fair to say that people love Dwyane Wade and Gabrielle Union together, and their latest visit to Milan for its Fashion Week has fans raving. The 40-year-old basketball star and 49-year-old actress had cohesive looks that pulled from many seasonal trends like mesh, crochet, micro-miniskirts, and bra tops.

For the June 19th show, Wade and Union wore matching Prada designs, with a triangular logo seen on both Wade’s yellow tank top and Union’s knit dress. It’s a perfect combo of casual, comfortable, and still quite classy. This fit alone awed fans and audiences, with many on social media singing their designer’s praises. But Wade and Union came to impress, and the fits didn’t end there.

Just hours later, the couple were spotted in some new garments that Gabrielle Union showed off on Instagram. The couple, parents to three-year-old Kaavia, matched Wade’s white mesh top with Union’s white crochet bra top. Completing the fit are Wade’s black tracksuit and grey sneakers and Union’s brown suede miniskirt and heels. While the Bring It On star posted the fits on Instagram, they were also spotted around the city with new additions– Union wore an unbuttoned black blouse over her top and Wade added a silky white shirt to go with the mesh.

Wade recently spoke out on fearing for his transgender daughter Zoya’s safety, a sentiment that Union clearly shares after the advice the couple gave to parents of trans children. No matter what negativity transpires online, Wade and Union are still strong and one of the fan-favorite power couples of the moment.

You can check out some more pictures of their fits and reactions to the coordinated looks below.