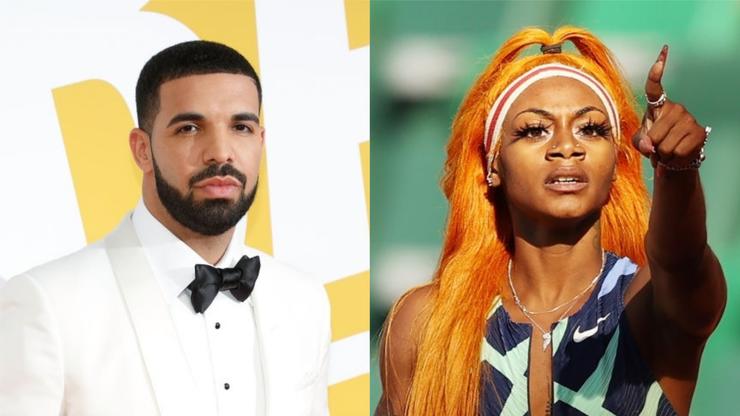 Drake rapped that he’s like Sha’Carri because he “smokes ’em on and off the track” but fans are saying the bar already didn’t age well.

Drake has finally released his sixth studio album Certified Lover Boy after multiple delays. The album was initially expected to drop back in January but after the Toronto native suffered a leg injury, he pushed back the release to focus on his recovery. Following the release of Kanye West’s album DONDA last week, Drake came through to steal the spotlight, dropping Certified Lover Boy this morning.

The album’s rollout was impeccable, with Drake putting up billboards in multiple cities across the world to announce his featured artists. With the world sharing their first impressions of CLB, many fans have been commenting on the song “No Friends In The Industry,” during which the rapper name-drops American printer Sha’Carri Richardson, who commanded a strong media presence this summer after failing a drug test and being barred from competing in the 2020 Tokyo Olympics.

“And I’m like Sha’Carri, smoke ’em on and off the track,” says Drake in his first verse, referring to the track & field star failing a cannabis drug test.

Prior to the Olympics, Sha’Carri was viewed as one of the favorites for the 100M sprint, but three members of the Jamaican team ran faster than her personal best, which prompted the public to turn on her. In her return race at the Prefontaine Classic, Sha’Carri finished in last place. Ever since then, she’s been active on social media, most recently telling her followers that she’s choosing violence from now on.

Due to her ninth-place finish at the Prefontaine Classic, some Drake fans are saying that he probably should have re-recorded that line, because as of late, Sha’Carri hasn’t been smoking anyone on the track. Contrastingly though, some fans are high on Sha’Carri again after the name-drop, saying, “Sha’Carri made it onto CLB, she’s back in first place.”

What do you think about the name-drop? Listen to “No Friends In The Industry” below.