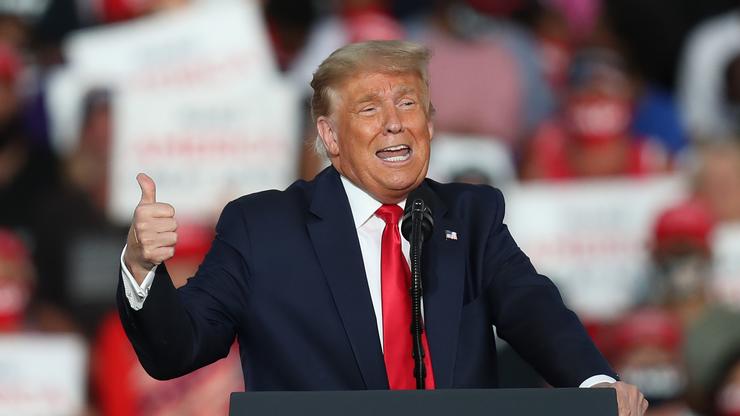 The President told those in the audience of his Florida rally that he’ll give everyone a “big fat kiss.”

He’s back to heating up the campaign trail to promote his bid to become America’s leader once again. After a strikingly brief bout with COVID-19, President Donald Trump is once again inciting ire from the public regarding his ambivalent take on coronavirus. Following his presidential debate against Democratic opponent Joe Biden, Trump was hospitalized after being diagnosed with COVID-19. He remained at Walter Reed Hospital for just a few days before he returned to the White House, boasting that he felt better than ever and was cured.

During his recent appearance on Fox News, Trump declared he was immune from COVID-19, and he doubled down on those comments on Monday (October 12) during his packed, maskless rally in Florida. His supporters came out in their best Trump gear, waving “Make America Great Again” signs by the hundreds. “Now they say I’m immune, I feel so powerful,” Trump told a roaring crowd. “I could walk into that audience. I’ll walk in there, I’ll kiss everyone in that audience. I’ll kiss the guys and the beautiful women and everybody. I’ll just give you a big fat kiss.”

Trump has been heavily criticized for his handling of the pandemic, but he remains steadfast that his approach to COVID-19 was done with care and concern. America’s 2020 Election is less than a month away. Watch the President’s clip below.