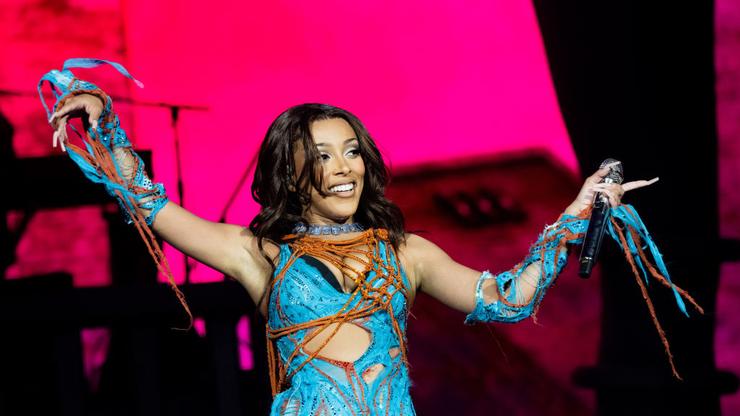 Doja’s music genre has long been debated, and even earns her backlash after winning awards from time to time.

Earlier today (May 24), Doja Cat unveiled the photos from her upcoming Elle Magazine cover, which find her rocking gorgeous garments from Maison Valentino, Christopher Kane, and Giambattista Valli, just to name a few. Along with the stunning photoshoot, the California native also gave an interview during which she revealed that her upcoming album is going to include more rap music than any other genre.

“I’ve rapped since the beginning, and I really couldn’t even sing that well to begin with – I got a lot better,” the 26-year-old explained. “I use my voice as a tool to create these worlds, and it’s fine if people think that I can’t rap.”

Doja’s musical genre has been a long-debated topic of conversation. At the 64th Annual Grammy Awards her Planet Her project was nominated for Album of the Year as well as Pop Vocal Album, and while it didn’t win either of those, its lead single, “Kiss Me More” featuring SZA took home the prize for Best Pop Duo/Group Performance while also earning nods for Record of the Year and Song of the Year.

More recently, she took home several R&B awards at the Billboard Music Awards, prompting Summer Walker‘s boyfriend to speak out, saying that while Doja is a talented artist, she belongs in another genre, and it seems that even she is ready to lean more into her rap artist side.

As HipHopDX notes, the entertainer previously revealed that her new project will be a double album with production from 9th Wonder and Jay Versace. “I have been getting songs and things sent to me,” she shared during her Elle cover interview.

“Oh f*ck, I wish I could tell people! There’s some really cool stuff that I got sent from friends. They’re all working on beats, and I’m giving them notes and they know what I want, so I’m excited.”

In other news, it was recently announced that the “Ain’t Shit” songstress had to drop out of The Weeknd‘s stadium tour as she recovers from tonsil surgery – read more about that here, and let us know if you’re eager to hear Doja Cat‘s rap-centric album in the comment section below.