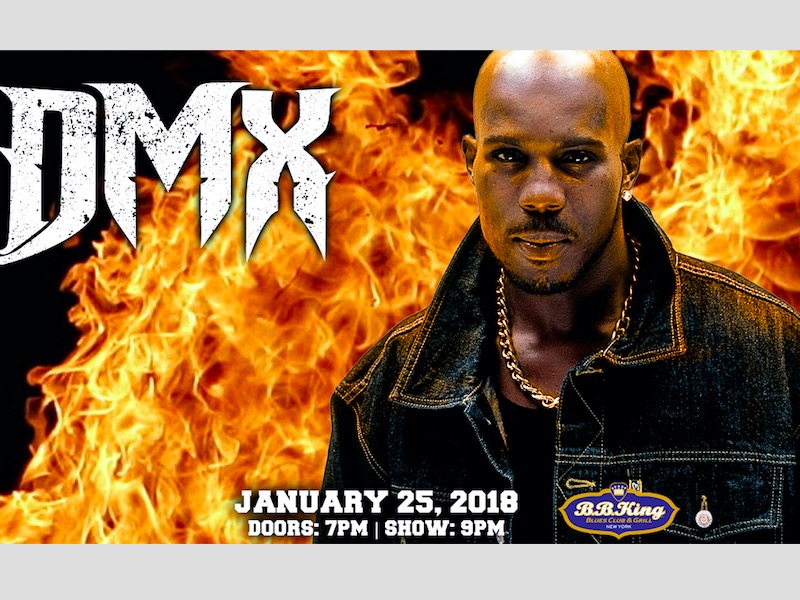 Need a reason to hit up New York City? Miss those Ruff Ryders days? Wanna pay your respect to a legendary hip-hop veteran?

The first reason you should go check out the legend DMX on Thursday, January 25 at B.B. King Blues Club & Grill is because the man’s straight out the New York streets. The Def Jam icon embodies the voice the street and has always rapped about the struggle what it was like for people from the hood. He made sure people outside the hood felt what they had to deal with. DMX is one the best emcees from New York and he showed his skill with his raspy, raunchy hood pope preaching to the outside world showing them that they are not alone. The connection he had with his fans is still unheard. It’s amazing to see a man who was able captivate the eyes crowds. If you don’t believe it, just come out and witness greatness. NEED TO BUY YOUR TIX RIGHT NOW? CLICK HERE!]

Reason 2: …And Then There Was X

The second reason you should come out and see DMX is because his legacy. DMX has to be hands down one the best hip-hop performers that has ever stepped up on the stage. His skills and talent even surprised the man responsible for discovering him – Murder Inc. CEO Irv Gotti. Why would you not come out and support the dog D to the M to the X? Come out and hear classics like, “Where The Hood At” and “Slippin’” – those are classics. This legend has not lost a beat or step. There’s something about him where no matter what he’s done, he still demands attention. He’s like The Rock walking to a WWE arena – he just manages to electrify us with his performance. NEED TO BUY YOUR TIX RIGHT NOW? CLICK HERE!]

The third reason you should come see DMX hold things down at B.B. King Blues Club & Grill is because his stash hits. DMX has so many songs that are so iconic that it will always be played – our children’s children will remember. If you need that one song to hype things up, it’s gotta be “Where The Hood At,” you can be having a bad day, you’re having baby mama drama you want to listen to something to hype you up and keep moving. The song has been proven to make people hype just look at what he did in the 1999 Woodstock concert and watch that crowd control. The next song you can’t ignore is “X Gon’ Give It To Ya” – this is a song that I’ve people just stop doing what they are doing and just sing along to it and get hype as hell and get lit. He literally brought the mosh pit in to hip hop especially before it was even a thing in hip-hop. Another DMX song that is one his darkest stories is “Slippin’” because it’s so raw. He’s speaking his experience, abuse and abandonment his mother which shows you he put his whole life out there for people to see. NEED TO BUY YOUR TIX RIGHT NOW? CLICK HERE!]

The fourth reason you should go see DMX is because the man is from New York City and it’s the dog making an appearance. When the dog is out the dog is out to give you guys a performance only DMX can. Don’t believe me? Go to your phone and look the man up. Wherever he goes he does magic. He does work on the mic. DMX has proven time after time that he still is the Ruff Ryders champ. NEED TO BUY YOUR TIX RIGHT NOW? CLICK HERE!]

The fifth reason you should go see DMX at B.B. King Blues Club & Grill is because you will get one the best performances. X will pour his heart out for you on the stage. DMX has shown that time after time people love to listen to the words that he speaks. NEED TO BUY YOUR TIX RIGHT NOW? CLICK HERE!]