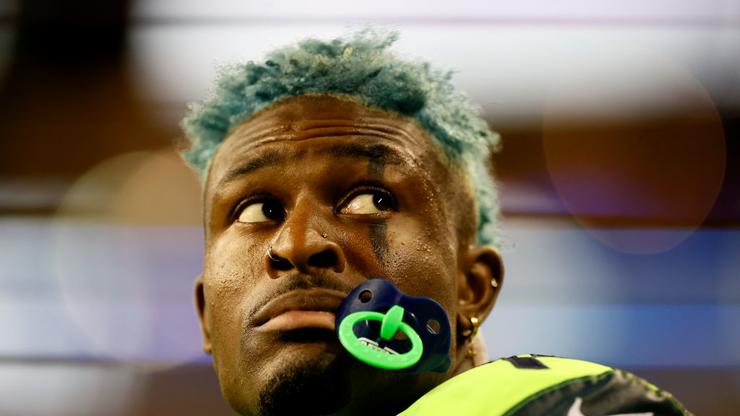 DK Metcalf is one of the strongest wide receivers in the entire NFL and he has proven to be one of the fastest despite his tremendous size. With that being said, many Seahawks fans are relying on him to make big plays during these next few weeks, especially with Russell Wilson out of the lineup. Last night, the Seahawks played their first full game without Wilson, and Geno Smith almost led the team to a win, however, they ultimately lost in OT to the Steelers.

In the last play of regulation, Metcalf caught a pass, and instead of going out of bounds, he tried to press for more yards and ended up fumbling the ball. From there, his team recovered and everything worked out just fine as they went on to tie the game.

While the Seahawks didn’t lose because of the play, the whole sequence was questioned by Shannon Sharpe on Twitter, who thought Metcalf’s play was stupid. After the game, Metcalf saw these comments and clapped back at the Hall of Famer saying “Stop questioning me lil boy.”

This then led to a response from Sharpe, who went in on the young wide receiver, saying “Nothing to question. That was “DUMB ASS” play and your pride won’t let you admit it. “You” can’t question anything I’ve done. Pray your resume will be as complete as mine, PRAY. Enjoy the rest of your day.”

After all, Sharpe has three Super Bowls, a gold jacket, and is considered a Top 5 tight end of all time. With all of that in mind, there is no doubt that the Undisputed host has a right to these takes. As for Metcalf, perhaps he can use this as a learning experience.