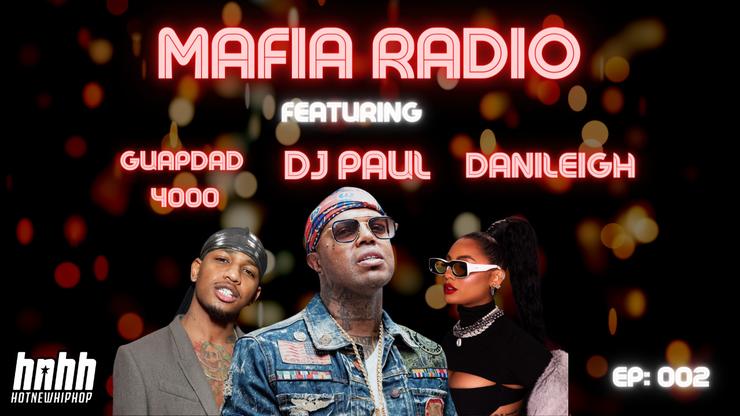 In the second episode of DJ Paul & HNHH’s “Mafia Radio” podcast, Danileigh talks about working with Prince, and Guapdad 4000 speaks on his past as a scammer, his thoughts on the election, and being a comic book lover.

Last week, we debuted the first episode of HNHH X DJ Paul’s “Mafia Radio” podcast featuring Xzibit, as well as an in-depth feature with DJ Paul. In this new episode, DJ Paul kicks off the podcast speaking with dancer and rapper, DaniLeigh, fresh off the release of her single, “Monique.” The song incorporates DaniLeigh’s honeyed sing-songy raps, and already has fans tossing up suggestions as to which rappers would make for a seamless feature on the track, including Swae Lee, Thugger, and Offset.

The 25-year-old quadruple threat also sheds light on her association with the legendary Prince, who entrusted her to direct the 2014 music video for his song, “Breakfast Can Wait,” after finding her online when she was just 18 years old.

“He told me he saw me online, and at that time I was a super-busy dancer, I was booking jobs, so I had like, the BET Awards with Beenie Man and Miguel, and I was just in a lot of music videos. I was very heavily on social media, just like I am now, but more so doing funny videos and dance videos and things like that…he just loved my personality and my content.”

Guapdad 4000 also hops on the podcast and DJ Paul lights up as the pair discuss the country’s political climate, as well as the 28-year-old rapper’s past in scamming, which he defines as, “The act, or art, of identity theft or illegal manipulation of someone else’s funding.” Guapdad 4000’s days as a scammer are long behind him, however, as the Oakland native moved to Los Angeles in 2017 to pursue a career in rap, and has since set his sights on other endeavors, such as becoming more versed in politics.

The rapper shared his thoughts on today’s political landscape with DJ Paul, saying, “The president is set up–his job is to literally almost be a war criminal because America is run off conflict, that’s just the way all the business works. So like, it’s really just choosing who gon’ be the friendliest one, for me, when it comes to the president,” the rapper continued, “I really took the time this year to educate myself on all the props and sh*t, ‘cause that’s what’s really a n*gga gon’ feel. I was happy when Obama was president, but he was still bombing n*ggas too. It was just he was black and played basketball so that was tight, but they all do the same sh*t.”

The pair proceed to illuminate their shared love for comic books, naming Jonathan Hickman’s Avengers, G.I Joe, and Transformers as some of their favorites, and comparing collectibles. Guapdad also debuted a Chibi-art-style body pillow that is part of his recent merch release, and is available for purchase on his site at www.guapdad4000.com for all those quarantining alone, or just want a human-sized pillow in their possession, because why not.

For more from DJ Paul, DaniLeigh, and Guapdad4000, check out the full episode of Mafia Radio above, and keep an eye out for future episodes soon to come your way.