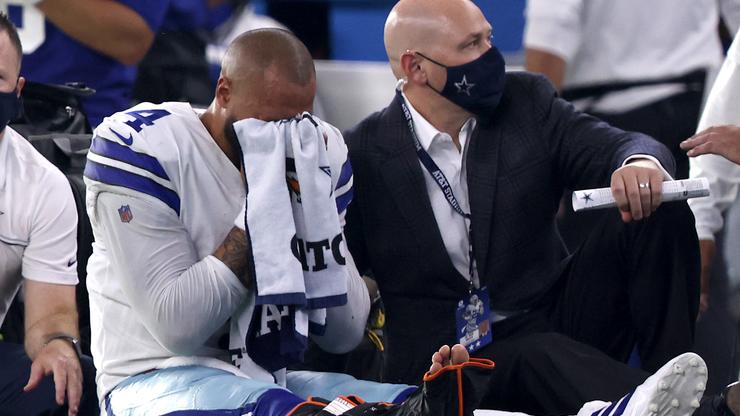 Dak Prescott of the Dallas Cowboys suffered a horrific injury on Sunday while playing against the New York Giants. During a tackle, Prescott’s ankle got caught beneath him which lead to dislocation, as well as a compound fracture. Prescott immediately understood the extent of his injury as he could barely hold back his emotions. After everything he has been through this year, it was a devastating blow to a player who is considered to be a fan-favorite around the NFL, regardless of his playing for the Cowboys.

According to the Dallas Morning News, Prescott had successful surgery last night and will be out of the hospital today. Based on their reporting, it would appear as though Prescott will have to miss four to six months of action as he tries to recover from this devastating blow.

Following the injury, Cowboys owner Jerry Jones issued a statement on Prescott and how he is devastated by what happened.

“We are all heartbroken for Dak and this very disappointing injury. The outpouring of messages that I have received regarding his setback speaks volumes to the respect and admiration that he has earned from his teammates, former Cowboys players and Cowboys supporters everywhere. I know this young man very well. I know the personal hardship and strife that he has faced, dealt with and overcome in his young life. And I know of no one who is more prepared, from the perspective of mental and emotional toughness and determination, than Dak Prescott to respond and recover from this challenge that has been put in front of him. He is an inspiration to everyone he touches. He has all of our love and support. And we have no doubt that he will return to the position of leadership and purpose that he brings to our team.”

Hopefully, Prescott will be able to come back with a vengeance, following this injury. He is a player that we can all root for, especially given these circumstances.